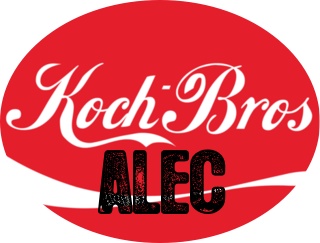 That brings to more than 90 the number of organizations that fled ALEC since its ties to the Koch brothers were revealed. The Center for Media and Democracy recently reported,


...the petrochemical giant Koch Industries gave ALEC $504,700 between 1995 and 1998. This is in addition to nearly a million dollars that foundations controlled by the billionaire Koch brothers gave ALEC outright between 1998 and 2012, and a nearly $500,000 loan that the Charles G. Koch Charitable Foundation gave ALEC in 1996. These amounts also do not include any personal checks from Charles or David Koch.

According to Common Cause, the four companies told Walden Asset Management they have left ALEC:


Raytheon previously contributed to ALEC’s Arizona scholarship fund, which helps pay politicians’ travel and lodging expenses to ALEC’s out-of-state conferences. Sempra Energy, another ALEC funder, acknowledged a letter to Walden that it is “well aware of the controversy concerning ALEC.” Both Southern California Edison and Illinois Tool Works noted that they have not had any recent involvement in ALEC and have stopped funding the organization.

...To date, more than 90 corporations have decided to leave the controversial organization, including Coca-Cola, Kraft, General Electric, Wal-Mart, General Motors, and Microsoft.

Common Cause has filed a complaint with the IRS charging ALEC is masquerading as a charity but is really a corporate lobbyist. (That sounds reasonable to us.) Common Cause is asking the IRS to take away ALEC's tax-exempt status.