Teamsters celebrated National Truck Driver Appreciation Week with lots of great photos of union-driven trucks sent in by our members. Check out the Teamsters Facebook page to see them all, or keep an eye out for the video we're creating.

We also received some great comments, a few of which we'll share here:


Carolyn Steven: My husband is very private so we have not posted his photo with his truck this week. We live in a "right to work state". He is Union and I work as a teacher in this "right to work state" and very involved with the rights of workers since I am from a UAW family. Thanks for recognizing Truck Drivers. I work as an itinerant, special education teacher in a non-union state and drive as many mile as my Teamster husband. I give a silent praise to every trucker as I travel hoping they realize how important the work they do is and hopeful they are organized.

Caroline Trimmer: Happy Driver Appreciation Week to all of the RETIRED DRIVERS from Anchor Motor Freight/Leaseway (the good old days)


Steve Oswald, Teamsters Local 600 St. Louis, MO. When I was a young man about 20 years old, I was living in my car with nowhere to go and no future...I met an old man who was a Teamster, we began to talk and I told him about my situation and he told me about driving trucks and the Teamsters. I had a Chauffer's License and with a little help from a girl friend at the time, and the advice from the old man, I got a job driving a truck. It wasn't the greatest job in the world but it was a Teamsters union job and it taught me a lot about trucking, management and unions. I quit that job after about 5 or 6 years and worked driving trucks non-union for a few years, what a mistake that was, but I did learn a lot about the non-union trucking industry the hard way, and I know it made me a better union man and appreciate the Teamsters union! So I knew I had to get back into the Teamsters and eventually I did, and that's a story in itself for another time! But anyway, what I'm trying to say is that if it wasn't for that old man, which I'm sorry to say I don't remember his name, my girlfriend at the time, fate, and the Teamsters, I don't know where I'd be right now! The Teamsters took me off of the streets gave me a good job and taught me a lot! Thank God for the Teamsters and organized labor, because without them I would probably be dead or in prison just like a lot of the guys I grew up with! ... God Bless The Teamsters!!!

The photo below makes us hungry:

Corie Kaminski Thorner: This is the way we roll for Truck Driver Appreciation Week 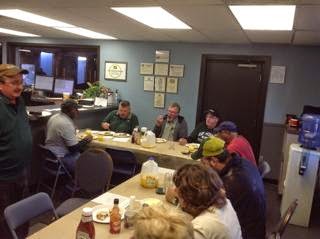