How did your senators vote on stopping billionaires from buying elections? 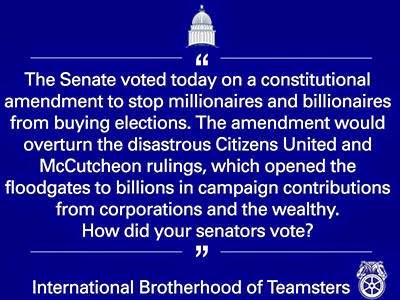 We know Mitch McConnell voted today in favor of billionaires continuing to buy elections. He said no one in Kentucky (his state) cares about it.

Really, Mitch? In May, a poll by CBS News showed something quite different. Here's what the poll found:
The amendment failed because it needed 60 votes, and only 54 senators voted for it. Did your senators vote with the people or with the billionaires? Find out here.
Posted by Teamster Power at 4:30 PM