What went wrong with the US in one chart 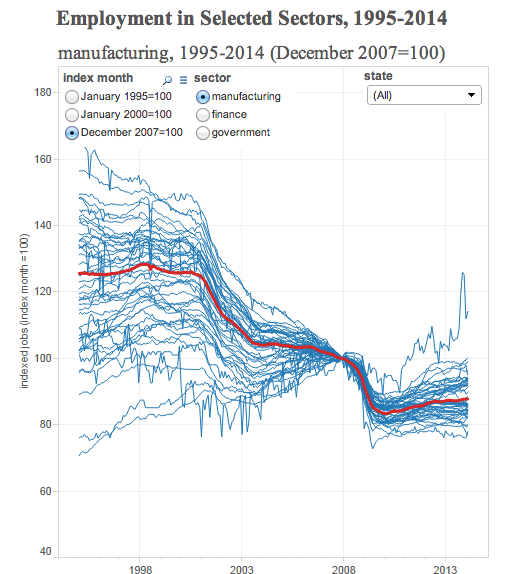 Wall Street gorged on a bigger share of the U.S. economy at the expense of manufacturing over the past 20 years, according to the chart. It's an old story, and one familiar to any Teamster who worked for a company that got bought out by Wall Street.

The Center for Economic Policy and Research explains what happened to manufacturing:


Manufacturing sheds about 20 percent of its job base during the recession of the early 2000s, and then nearly another 20 percent during the 2007-9 downturn. These losses reflect cyclical shocks, but also the relentless pressure of trade and currency manipulation.

Here's what happened to Wall Street:

Financial employment, by contrast, shows fairly steady gains across this era—rising about 20 percent through 2007 before suffering some losses early in the recession. Employment alone understates the rise of finance, which has—over the same span—captured even greater relative shares of value-added and corporate profits.

The rise of Wall Street and the decline of manufacturing is no accident because Wall Street profits by preying on manufacturing. When money people buy a company that actually makes something or does something, they immediately plunder all the cash they can get out of it. Then they cut costs, kill it and kick it to the curb. Or as CEPR puts it:


Since the recovery began (June 2009), the public sector has shed 725,000 jobs—the vast majority (628,000) at the state and local level. This austerity, unprecedented in our recent history, is a drag on recovery and a direct contributor to slow job growth (or continued losses) across the economy.

You can see what happened in your state here.
Posted by Teamster Power at 10:52 AM