Our endangered Teamster brothers and sisters who drive horse-carriages in New York City are winning support from some powerful friends, including the New York Times editorial board, actor Liam Neeson and the New York Daily News.

They are defending some 300 horse-carriage drivers from animal rights extremists and Mayor Bill de Blasio, who want to ban horse-carriages and throw the drivers out of work.

Liam Neeson wrote an Op-Ed that appeared in The New York Times two days ago, saying the proposed ban is a class issue. The drivers' livelihoods are at risk because the animal-rights opponents of the industry are well funded by real-estate interests, which has led to speculation that this powerful lobby wishes to develop the West Side properties occupied by the stables. He wrote:


I have been a New York City resident for over 20 years, and have enjoyed Central Park for as long. As a horse lover, I grew up riding and caring for two horses every summer on my aunt’s small farm in County Armagh, Northern Ireland. I have continued to enjoy working with horses in a professional context over the years, appearing in a couple of Westerns and what I call “cowboys in armor” movies.

I can appreciate a happy and well-cared-for horse when I see one. It has been my experience, always, that horses, much like humans, are at their happiest and healthiest when working. Horses have been pulling from the beginning of time. It is what they have been bred to do.

Horses and their caretakers work together to earn a decent livelihood in New York, as they have for hundreds of years. 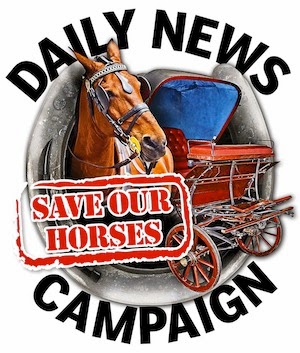 And now the New York Daily News is running a 'Save Our Horses' Campaign. (See the thank you video above.) The newspaper kicks off its campaign as the pricey electric car that animal rights advocates say could replace the horse carriages is making its debut at the New York Auto Show. (Help our your Teamster brothers and sisters and sign the petition here.)

The Daily News editorial board wrote a scathing commentary on the electric cars:


How fabulous we will make life when the amusement-park-ride chitty-chitty-bang-bangs roll through Central Park, they declare, the gentle clip-cloppers of yore having been saved from labor by a trip to the slaughterhouse!

And how wonderful we are to offer new livelihoods to the 300 carriage drivers whose jobs we will destroy, they proclaim, asserting that they have built a vehicle just so that these men and women can start new careers as slow-motion taxi-drivers!

The self-righteousness is revolting. Rebuke it by joining the Daily News Save the Horses campaign and signing our petition to Mayor de Blasio.

No one gets to do what these extremists are proposing. No one gets to throw people out of lawful jobs in pursuit of a social goal, no matter how brightly the aim burns with missionary zeal.

No one gets to instruct a working man or working woman that they would be better off switching careers to an occupation that has a stamp of approval issued by those of a higher moral order — that, or start over on the unemployment line.

Is this progressivism as defined by de Blasio?

Posted by Teamster Power at 4:35 PM