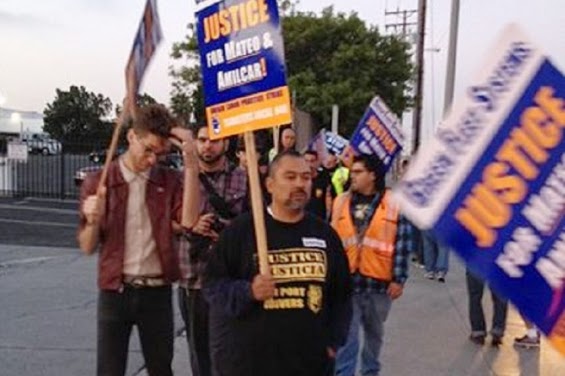 In the biggest job action to date, Teamsters are holding picket lines at the Ports of Los Angeles and Long Beach with port drivers who walked off the job yesterday afternoon.

The sudden two-day strike is the third in the past year, and port drivers have filed 500 claims with the state alleging wage theft due to their misclassification as independent contractors rather than employees. Thirty-two drivers won decisions against 13 trucking companies that settled for $3.8 million in wages and penalties.

Last month, the port drivers scored a huge victory when Pacific 9 Transportation (Pac 9) agreed that its port truck drivers are employees and have the right to join a union


More than 100 truck drivers are picketing at three trucking companies and following trucks from those companies as they pick up cargo from the nation’s largest port complex. The drivers, backed by the Teamsters Local 848 union, allege widespread workplace violations, organizers said.

Justice for Port Truck Drivers, the union-backed group organizing the strike, has accused trucking companies of wrongfully classifying truck drivers as independent contractors, a classification that denies drivers workplace protections such as overtime and mandated work breaks. It also results in lower pay, the group said.

One of the three picket lines is at Green Fleet Systems, where drivers are pushing to unionize with Teamsters Local 848. The company illegally fired two drivers for their union activity. The drivers and Teamsters are also picketing Total Transportation Services Inc. and Pacific 9 Transportation.

The port drivers were joined by members of the Longshoremen’s Union (ILWU) at the ports. ILWU members walked off the job to support the drivers, shutting down Long Beach’s Terminal F for hours before a federal mediator ordered them back to work.


The early-morning picket caused International Longshore and Warehouse Union workers to momentarily halt work and caused some truck traffic backups as workers spilled out into the street. Under the ILWU contract, workers have to stand by when a picket line is established and wait for a federal arbitrator to decide whether the strike is bona fide, which would allow them to honor the picket.

But by noon Monday, an arbitrator ruled that longshore workers at the ports had to return to work and that ruling applied to all port terminals.