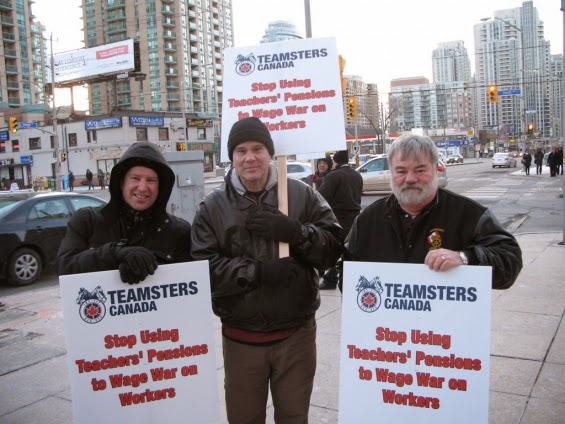 A Canadian teachers' pension fund is trying to bust the Teamsters union in Ohio.

Teamsters Canada President Robert Bouvier explains how the Ontario Teachers’ Pension Plan in 2010 bought Exal, a Youngstown, Ohio, manufacturer of aluminum bottles and cans. When workers started to organize with the Teamsters in late 2012, the company waged a vicious campaign of fear and intimidation by teachers’ management.

In a letter to the Windsor Star, Brother Bouvier writes:


...The pension plan, which is funded by contributions by and on behalf of Ontario’s unionized teachers, is waging a ruthless, vindictive campaign of harassment, intimidation and threats against U.S. workers of a company it owns: Exal.

In 2010, teachers acquired a controlling stake in Exal, an Ohio firm that makes aluminum bottles and cans and named three directors to its board to actively manage its investment.

The company settled the charges by posting a notice that it would not violate the workers’ rights again.


Creating a divisive and hostile work environment at the company’s only North American manufacturing facility is just bad business.

Ontario teachers should demand that the stewards of their retirement security enforce the principles of responsibility and respect the core values of the plan and its participants.

Posted by Teamster Power at 3:40 PM