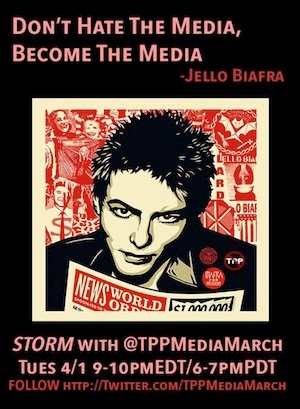 To fight the media blackout on the corporate power grab known as the TPP, Teamsters will join tonight's Twitter Storm between 9 pm and 10 pm Eastern.

It's been well documented that the network news programs are completely ignoring the TPP (except for our good friend Ed Schultz). The reason is obvious: These 'news' outlets are owned by the same multinationals that want the TPP approved. Five of them -- CNN, ABC, MSNBC, NBC and of course Fox -- are employing lobbyists to push Congress and the Administration to agree to the deal.

The networks know the best way to get the TPP passed is not to let anyone know about it. They're well aware that American voters overwhelmingly oppose TPP and proposed Fast Track legislation to push it through Congress.

Sooooo, Tweeters, tonight you can help embarrass the mainstream news media into covering the biggest jobs and wage story in a generation. Go to the Progressive Democrats of America TPP Media March Twitter Storm page here. Copy their tweets to your own Twitter account and tweet away. Or make up your own tweets.

The TPP Media March Twitter Storm is held every Tuesday evening, so if you miss tonight, you can try next week. There is also likely to be a Twitter storm aimed at U.S. Trade Representative Michael Froman on Thursday afternoon. Stay tuned.

(Wondering what, exactly, a Twitter storm is? It's a news story that starts on Twitter and through a feedback loop with traditional press generates a significant amount of attention across a broad audience.)