Republic Services is facing a major increase in costs for dealing with the burning, radioactive Bridgeton landfill near St. Louis, according to a new report. 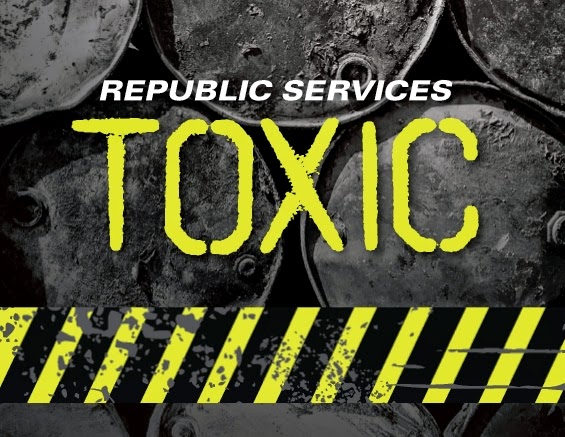 The company's mismanagement and refusal to deal honestly with the problem at Bridgeton hurts investors as well as the local community and workers, the report concludes.

The Teamsters, who represent Republic Services employees, issued a statement:


“Today’s report highlights how Republic is risking investors’ money and the public’s safety by mismanaging the clean-up in Bridgeton, Missouri,” said Robert Morales, Director of the Teamsters Solid Waste, Recycling and Related Industries Division. “The report raises a question that we all should be asking Republic – is Bridgeton just the tip of the toxic landfill iceberg?”

The nuclear waste remediation has already cost Republic Services $219 million and may cost much more if the Army Corps of Engineers takes over the site. The company's effort to avoid any Army Corps of Engineers' involvement failed, and it is now resorting to such desperate tactics as impersonating the EPA, creating a front group headed by an extremist blogger, opposing radioactive waste cleanup and lobbying the Missouri Legislature to pass a law stripping local authorities of their right to sue.

This is an ongoing and developing crisis, as engineering efforts to control the fire aren't working. Let's hope Republic decides to do the right thing and clean up the landfill instead of trying to deny there's a problem.

In the meantime, Republic Services investors can ask this question and more on Thursday, April 24, 2014 at 5:00 p.m. ET during the company’s first quarter investor conference call. The call can be accessed by logging onto the Republic Services’ Investor Relations page on www.republicservices.com or by dialing (800) 369-3117 or (210) 234-0084, passcode "Republic Services."