Teamsters to shareholders: Swift should not be CEO's piggy bank 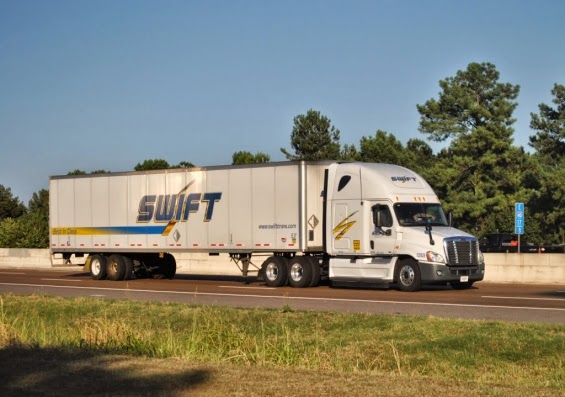 Teamsters want Swift Transportation shareholders to clamp down on CEO Jerry Moyes, who has been using the company as his own personal piggy bank.
The country's largest proxy voting adviser, ISS, agrees.

In a press statement released today, the Teamsters said:


...ISS recommends that shareholders of Swift Transportation [NYSE: SWFT] vote ‘FOR’ Item #4 on the company’s proxy – a Teamster proposal that seeks to address the company’s dual class stock structure which currently provides CEO Jerry Moyes with majority voting control of the company despite owning a minority of the outstanding shares. The company’s annual meeting of shareholders is scheduled for May 8, 2014.

ISS also recommends that shareholders withhold votes from members of the Audit Committee -- Richard Dozer, David Vander Ploeg, and Glenn Brown. It is the Audit Committee's responsibility to guard against excessive financial risks and potential conflicts of interest.

Investors are concerned about company founders pledging stock in light of the events at Chesapeake Energy and Green Mountain Coffee. In both cases, margin calls forced the founders to sell significant amounts of stock they'd pledged, causing their share prices to fall dramatically.

Last year, The Teamsters warned investors that Swift’s board of directors allowed Moyes to pledge nearly 25 percent of all outstanding shares as collateral for personal loans—putting shareholders at serious risk. ISS, said Moyes' gamble with company stock was a material risk to the company and presented potential conflicts of interest. ISS recommended shareholders withhold votes from the five directors who serve on Swift's Audit Committee, including the chairman of the board.


Allowing the company’s CEO and controlling shareholder Jerry Moyes to gamble nearly 25 percent of Swift’s total outstanding shares as collateral for his personal loans is indefensible.

Moyes has a history of skirting the rules.

In 2004, the U.S. Department of Justice and SEC investigated suspected insider trading by Moyes at Swift. In 2005, Moyes paid $1.5 million in disgorgement, prejudgment interest and penalties to settle the SEC insider trading investigation at Swift. He resigned from all of his leadership positions, but then took the company private in 2007 and public again in 2010. He created a dual class stock structure, giving himself 54.5 percent of the voting power for his 40.4 percent holdings of common stock.

“Until there can be meaningful board oversight of management and true accountability at Swift Transportation, Jerry Moyes will continue use the corporate coffers as his own personal piggy bank,” Hall said.

Posted by Teamster Power at 4:56 PM