Another victory for Teamsters and loss for ALEC! Missouri Gov. Jay Nixon just announced his veto of an ALEC-inspired paycheck deception bill.

The bill, which passed earlier this year, would forbid employers from honoring public employees' requests to deduct their union dues from their paychecks. Chalk it up as another billionaire-backed attack on workers that failed.

Missouri Teamsters deserve high praise for working to make sure the bill didn't pass with a veto-proof majority. They sent thousands of emails to their representatives in Jefferson City urging them not to vote for this blatant attempt to weaken unions.

Paycheck deception bills have been popping up in state legislatures all over the country. They're part of ALEC's continuing effort to muscle the working class out of politics and government. 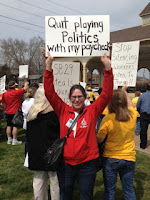 Nixon acknowledged as much in his veto message:

The bill targets a single group of employees and imposes on them an unnecessary and cumbersome process.

There are a number of items that employees may elect to have withheld from their paychecks, including money for college savings accounts, deferred compensation, and 401(k) plans...Singling out union dues for these extra processes serves no beneficial purpose. Rather, the bill places unnecessary burdens on public employees for the purpose of weakening labor organizations.

The We Are Missouri coalition praised the veto:


We are grateful that Governor Nixon stands as a firewall against the extremist agenda that would unfairly take rights away from workers and seeks to lower wages in our state. He joins the courageous legislators in both parties who sided with working people despite pressure from out-of-state special interest groups.

Legislators should be looking for solutions to the problems facing Missouri instead of doing the bidding of their corporate backers and out-of-state front groups.

If you have any doubt, check this out: