A Walmart striker and a Bangladeshi union activist challenged the company to stop killing and impoverishing its workers today at the annual shareholder meeting in Bentonville, Ark. Hundreds of striking Walmart workers have spent the past week at the company headquarters demanding respect and a living wage.

Union members, community activists and clergy are staging direct actions against Walmart stores all over the country to support the striking workers. Several hundred Walmart associates walked off the job last week and boarded six buses bound for Bentonville, emulating the civil rights freedom riders of 1961.

A week of rallies, marches and prayer vigils in Bentonville culminated today in the delivery of a petition at the annual meeting. The petition, with 150,000 signatures, demands Walmart stop retaliating against workers who complain their paid so little they rely on government help to survive.

OUR Walmart tells us about Janet Sparks from Louisiana, who spoke at the annual meeting.


OUR Walmart member Janet Sparks talks with CEO Mike Duke and Chairman of the Board Rob Walton. Janet delivered a petition of 150k signatures calling on an end to Walmart's retaliation. She also presented a shareholder's resolution that would tie executive compensation to Walmart's overall performance.

We rely on Twitter to tell us what's happening elsewhere today. In Chicago, Larry a Walmart worker, tells the people's shareholder meeting that Walmart is predatory because it offers no benefits, low wages, and disrespect. Another Walmart worker, Lorraine, offered a resolution calling on Walmart to offer a base salary of $25,000 and respect

In Philadelphia, the Fight For Philly community group came to the Walmart in South Philadelphia in solidarity with the Walmart strikers. Managers are trying to block them from collecting petition signatures, as the photo below shows. 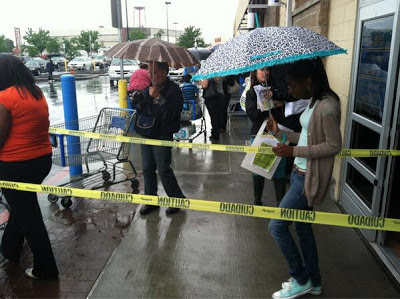 And in Chatham, Mass., labor activists delivered a petition signed by IBEW members to the store manager. @trinatocco tweeted:


Just delivered @IBEW sigs to chatham Wmt; mgmt refused to commit to not retaliate against workers...

Yesterday, Walmart strikers in Bentonville went to the home of Walmart heir (and board member) Jim Walton. Josh Eidelson at The Nation tells us:


...striking employees and supporters boarded buses just after 6:15 am CST for an unannounced visit to the home of Walmart board member Jim Walton, the billionaire CEO of Arvest Bank Group. Around 7, when workers stepped off the bus, police were already present, and prevented them from walking along the long private road to Walton’s house.

Organizers say the actions are beginning to make a difference at Walmart. The Huffington Post tells us:


“On the store level, people have won all kinds of victories,” said Dan Schlademan, a campaign director for the United Food and Commercial Workers, one of the main union backers of the movement, rattling off a list: “getting writeups taken away, terminations undone, wages fixed.”

More broadly, he added, the movement is educating people that they have rights. “There's a transformation happening among Walmart workers that's at the foundation of this,” Schlademan said. “Walmart will never be the same again.”