IKEA locks out 350 Teamsters in Canada

Our brothers and sisters in Canada are in a tough struggle with IKEA, which has locked them out for a month and tried unsuccessfully to hire replacement workers.

The furniture giant shut down its Richmond, B.C., store for an hour on May 13 after Teamsters rejected their contract offer by an 84 percent margin. It was the third time the 350 Teamster employees had voted down IKEA's offer.
On June 5, Teamsters Canada tells us:


Swedish big box Ikea’s attempt to bring in replacement workers under the noses of the locked-out workers of the Richmond, B.C., store has failed thanks to a decision of the province’s Labour Relations Board.

Ikea was found guilty of bringing in out of province workers, using workers hired after notice to bargain was given and using third party contracted workers to keep the store open during a dispute that has seen some 300 workers locked out since May 13, 2013. Unlike a strike, a lockout is initiated by the employer.

The decision, rendered June 5, thrilled the store’s workers, who are represented by Teamsters Local Union 213.

“I think it sends a clear message to both Ikea’s local management and head office,” said Anita Dawson, the Teamsters’ local business agent. “Ikea’s butting heads with the biggest union in North America and thought they could bully us. Well, they were wrong.” 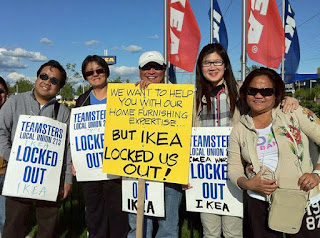 IKEA is still insisting on calling the lockout a strike.  The store is open during reduced hours with a skeleton staff. The Tyee quotes Sister Dawson:


"The company wants us to come back under the terms of their new contract offer. We are willing to resume work under the terms of our old contract with only a few small changes while we bargain, but not under the new and reduced terms of Ikea's offer," she said. "They are trying to bully our members back to work under worse conditions, and it isn't going to succeed."

Some of that "bullying," Dawson said, includes what she called "backwards bargaining," the company's announcement that the longer the dispute continues, the more of its offer will be taken off the table. Already on June 3 some elements of the company's offer were removed, including a $500 signing bonus for employees.

On June 8, absent a settlement, the company plans to implement a maximum yearly cap for prescriptions and reduce paramedical coverage, such as currently unlimited payment for chiropractic treatments. A third round of scheduled reductions in the contract offer will kick in on June 13.

"Ikea is offering a reduced contract, including a tiered wage system which will see some existing employees getting reduced wages and benefits. The company is also trying to force concessions in hours of work, allowances, benefits and work classifications on its workers, and that's simply not on," Dawson said...

The Teamster spokeswoman said that Ikea's "bullying" had included multiple harassing calls to her members. The company, she said, is showing "outrageous behaviour by an employer which is determined to underpay its employees and force its will on the union."

Please give our brothers and sisters a message of support on Local 213's Facebook page.
Posted by Teamster Power at 4:06 PM