Chicago Teamster funeral directors hope they won't have to strike

As Teamster funeral directors in Chicago head into talks with corporate giant SCI tomorrow, they're hoping they don't have to sanction a possible strike or job actions at local funeral homes and cemeteries.

But the company's unchecked greed and indignation may force strikes and labor disputes.

The Teamster funeral directors' new website, integrityinillinois.com, explains SCI is a $3.8 billion company with about 13 percent of the market share in the funeral industry.


Founded in 1962, SCI has grown into a company with 1,423 funeral service locations and 374 cemeteries (including 214 funeral service/cemetery combination locations) in North America. The company’s business model is based on buying successful funeral homes that are well known in any given community. The company then retains the home’s original name and often the home’s original owners as managers. Many times the affected community doesn’t even know a multi-billion dollar corporation now owns the funeral home. 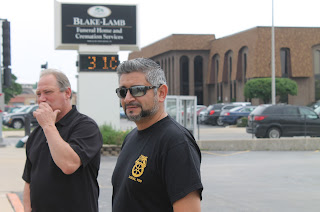 You'd think a company would reward its employees after its stock rose 56 percent in the last year. You'd be wrong. SCI is demanding 40 concessions from the funeral directors who have made it so successful. The funeral home giant wants to eliminate the  pension plan, raise the cost of health insurance, freeze wages for new hires and remove protections for disabled employees.

You can help your brothers and sisters at Chicago funeral homes by signing the petition here. It says, in part,


These workers are professionals who provide an invaluable service to grieving families, and they deserve the same respect they give to our communities.

We'll keep you posted on the negotiations.
Posted by Teamster Power at 2:48 PM