This is what we union THUGGS do for tornado victims

...we do everything we can to help them get back on their feet.

Our brothers and sisters at Teamsters Local 886 in Oklahoma City have cleared debris, loaded trucks with emergency supplies, raised money, given cash cards to members who've lost everything and handed out diapers, rakes and flashlights -- as well as bags of sweets from Teamster employer Kellogg's.

Oklahoma City has a long way to go to recover from the series of violent tornadoes last month that  killed 20 people and injured hundreds. The mayor of Oklahoma City estimated 13,000 homes were damaged or destroyed. Among those who perished were a UPS Teamster member's wife; his 8-year-old son is still hospitalized.

Oklahomans still have debris to clear before they can rebuild their homes. Many lost cars in the flooding that followed the second series of tornadoes.  And those who lost all of their possessions need cash to buy essentials -- like socks to wear to work.

You can help by contributing to the Teamsters Disaster Relief Fund. Just click here to make a tax-exempt donation.

"The need is still great," said Local 886 President Ron Cobb. "They've got all the water, diapers and crackers. They need cash now." 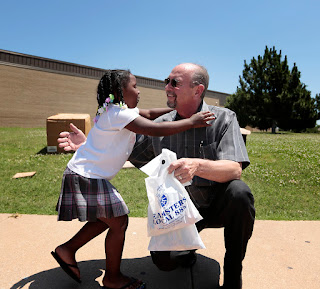 And, he said, they need cars and they need houses.

In some isolated areas, help is slow to come. That was the case when Cobb and volunteer Teamsters and retirees came to a low-income neighborhood that had been hit twice by the storms. They distributed Red Cross supplies and brought plastic bags filled with treats for the local children. As the photo to the right shows, the gesture was much appreciated.

Cobb said the local is helping fill out forms for the dozens of Teamsters whose homes were damaged or destroyed.

Local 886 recently got a call from a woman whose father and uncle are YRC retirees. She asked if they could help find a couple of trailers for them to put their belongings in until they can move back into their houses. The local is on it.

The Teamster son who was injured by the tornado will soon be transferred from one hospital to another. UPS Teamsters helped to get a fifth-wheel trailer so his dad can live in it near the hospital while he recovers. "He doesn't have a place to live anyway," Cobb said. His house was destroyed, too.

Please don't forget to make a tax-exempt donation to the Teamsters Disaster Relief Fund to help our brothers and sisters and other victims rebuild their lives. And remember, "THUGGS" stands for Those Helpful Union Guys and Gals. 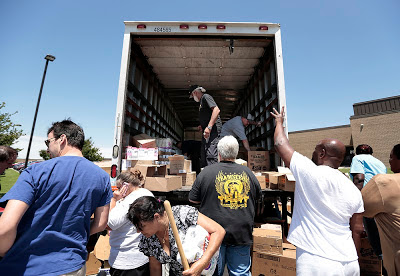 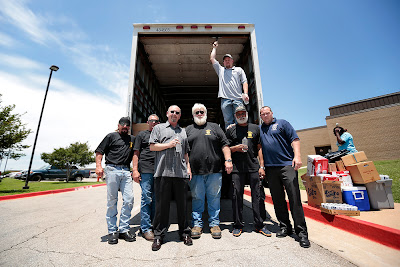 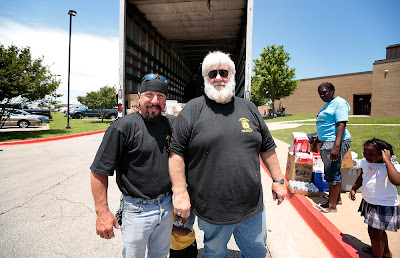