Teamster voices from across America

Back in the day, Robert Seay fought hard for the wages, seniority and safe working conditions that workers have today.

And now you can hear about his role in Teamster history on The Rick Smith Show. Just click here.

Rick Smith is a Teamster visiting labor history sites across America on his "Peoples Tour of America." He has already visited Teamster locals in Memphis, Little Rock and Los Angeles.

During a special podcast of the show, Brother Rick interviewed Teamster members about the history of the union, the changes in the trucking industry and the continued threat of No Rights At Work.  And he spoke to Robert Seay, now retired from Consolidated Freight and living in Memphis. Brother Seay tells us:


I started as a Teamster when I was 17 years old – started working at a dock in Birmingham, Alabama. I started out pushing a two-wheeler on the dock. In 1955 we got a pension system started and from contract to contract we fought to have better wages. We had to really fight for better working conditions, seniority rights. We had to walk picket lines in all kinds of weather, but we made it through. 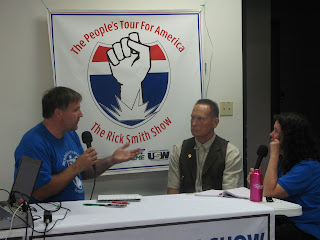 Karin Jones, Teamsters historian, described how two unions came together in 1903 to form the Teamsters. She said the union recognized the need to collect and preserve the union's history, ever since the 100th anniversary. And so the Teamsters Labor History Research Center was established at the George Washington University. Said Sister Jones:


The history archive gives students an opportunity to learn about labor and relate to the struggles that went into creating a strong labor movement to the challenges of today. We take donations from members, retirees, local unions, joint councils – everything that was important to members has a place in the Teamster archive.

Little Rock, Rick interviewed Melanie Orman, political coordinator at Local 878. She told Rick about the fights against cuts in unemployment benefits in the Arkansas Legislature and against attempts to misclassify drivers as independent contractors.

The next podcast of the People’s Tour will feature interviews made at Teamsters Joint Council 42 in Los Angeles.

Posted by Teamster Power at 9:18 PM