How CEOs are getting richer at your expense

Americans are recording the largest drop in wages ever while the average CEO received $14.1 million in combined pay and stock options last year.  At the same time, three-quarters of Americans didn’t have enough money for a basic emergency fund.  The Economic Policy Institute reports:

From 1978 to 2012, CEO compensation measured with options realized increased about 875 percent, arise more than double stock market growth and substantially greater than the painfully slow 5.4 percent growth in a typical worker’s compensation over the same period.

These findings support what we’ve known all along: trickle-down economics are a cruel joke. A third of Americans, over 10 percent more than in 2008, say they are lower-middle and lower class. Income inequality is rapidly increasing and the chances of your kids ending up better off than you are rapidly decreasing, no matter how hard they work.
The fact that CEO pay is more than 270 times more than the average worker isn’t a shock.
Turns out, even for one-percenters, CEOs are being paid ridiculous amounts: 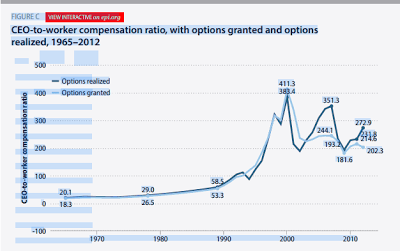 Posted by Teamster Power at 9:57 AM