What sort of impact is this having? Noah Baron, from the New American Politics PAC, argues:

Here are five ways unpaid internships are destroying the U.S.:


1. Unpaid Internships Are Ruining College: Researchers from the College Employment Research Institute at Michigan State University find that taking an unpaid internship can harm a student's performance in school. 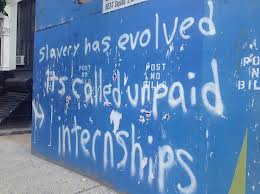 75% (of students) were also working a second job for pay in order to cover college expenses and the credits for their unpaid internship. Anecdotally, many students report working as many as 40 to 50 hours per week — and some of those are freshman. Their advisors often do not know they are working beyond their federal work study hours, and they are having trouble meeting assignment deadlines in class because they are working so much. When prioritizing their activities, work for pay comes first, internship or career enhancement comes second, and school work comes last.

Learning to balance academic, work and life responsibilities quickly translates into juggling paid work, unpaid work, and work that you pay to do. Small wonder only half of those lazy college students actually survive until graduation.

2. Unpaid Internships Have No Labor Rights: Because they receive no income from the company, unpaid interns are not employees, and are therefore not protected from sexual harassment, workers compensation, or any other sort of employment regulations. Forced to work 10 hour days, or don’t get a lunch break? Nobody cares. Without payment, interns are technically volunteers and have no labor rights.

However, interns are allowed to sue for negligence. And back pay. And anything else that happens to them. That is, if they can afford it.

3. Using Unpaid Interns Causes Massive Legal Liability Headaches For Businesses: The Department of Labor internship guidelines are very strict at for-profit institutions; you can’t replace workers or benefit from intern work, and you have to supervise interns with “training which would be given in an educational environment”. The Atlantic observes that: 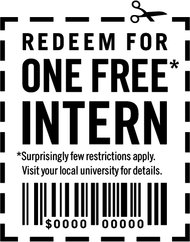 Any internship that doesn’t fulfill these stringent requirements is open to lawsuits from former interns similar to the recent Fox Searchlight, Atlantic City Records, New Yorker and W Magazine cases. Even internships used as college classes are suspect:

...the current arrangement between employers and unpaid interns is neither fair nor sustainable. The set-up — where organizations hire workers under pet names such as “apprentice” or “volunteer” and pass off full-time employees’ responsibilities without compensation — undermines a large pool of people in this country, typically young folks. In this sense, employers who actively recruit and rotate new talent without paying for it are directly hurting a critical sector of their own industries.

Without a paying job, intelligent recruits are likely to abandon the industry for something more sustainable: flipping burgers at McDonald’s.

5. Unpaid internships stifle job creation: The unpaid college internship has spawned the creation of the barely-paid post-college internship and a new class of perma-interns that roams around for new internship positions every few months in the hope that someday, someone will hire them.

Back in February, the Washingtonian commented on their plight:

Turns out, denying a significant section of the population good jobs with good wages hurts us all.
Posted by Teamster Power at 3:01 PM