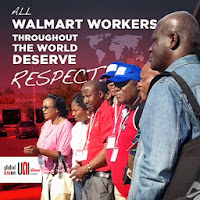 ‘Tis the season for strikes at Walmart and workers worldwide are catching the spirit. On the heels of increasing strike activity this month, workers are gearing up for Black Friday protests with a global week of action against Walmart.

The UNI Global Union – an international federation of 900 unions in 140 countries – has put out the call for global protests demanding respect and good jobs throughout Walmart’s supply chain:


Workers around the world will come together November 18-24 for a global week of action… Workers and their unions in countries such as Argentina, Brazil, Canada, Chile, South Africa, the United Kingdom, Bangladesh and the United States are joining together to demand better pay and working conditions for the 2.2 million Walmart workers and countless supply chain workers.

UNI passed a resolution last month in support of the Walmart campaign, creating the UNI Alliance @ Walmart. Its demands include that Walmart allow workers to organize without fear of retaliation and pay workers a living wage with decent working conditions.

The global union wants Walmart to sign a “Global Framework Agreement” with UNI that guarantees the rights of Walmart workers around the globe. It’s also calling on Walmart to sign the Accord on Fire and Building Safety in Bangladesh and to compensate the victims of factory disasters at Tazreen, Rana Plaza and Aswad – three factories (or “death traps”) that produced apparel for Walmart stores.


Walmart must pay its 2.2 million global workforce plus countless supply chain workers a fair wage and treat them with dignity. Workers and union members within the UNI Walmart Global Union Alliance will be taking their legitimate grievances to the street, demanding that the Walton family which controls Walmart finally wakes up and changes the company’s culture.

As part of the Global Action Week a petition and letter are being sent to the Walmart board cataloging a culture of unfair scheduling, low wages and retaliation against employees who have the temerity to speak out.

The Walmart Week of Global Action is the latest in a wave of low-wage worker strikes crashing Walmart’s busiest shopping season. The past few weeks have seen strikes in Los Angeles, Seattle, Chicago, Pittsburgh, Dayton and Cincinnati.

Teamsters are standing strong with the port drivers and warehouse workers.

The momentum for change at Walmart is building steam beyond the streets, too. Walmart is being charged by the NLRB with illegally retaliating against 117 workers. Plus, Walmart is getting slammed in the media with reports about an employee food drive in Ohio to help “Associates in Need” buy Thanksgiving dinner and a Demos report that says Walmart could afford to pay all of its U.S. employees $14.89 an hour if it stopped buying its own stock.

The globalization of Walmart labor unrest is welcome news for workers in the U.S. We need nothing less than a global movement of workers to take on a global giant like Walmart.
Posted by Teamster Power at 4:54 PM