Walmart holding food drive for its own employees 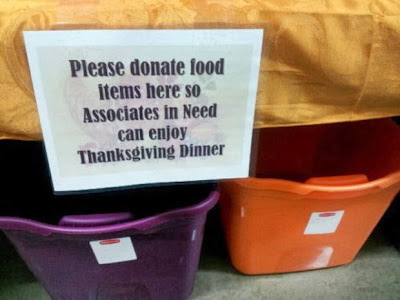 We're not making this up.


The storage containers are attractively displayed at the Walmart on Atlantic Boulevard in Canton. The bins are lined up in alternating colors of purple and orange. Some sit on tables covered with golden yellow tablecloths. Others peer out from under the tables.

This isn't a merchandise display. It's a food drive - not for the community, but for needy workers.

The newspaper calls the food drive an "element in the backdrop of the public debate about salaries for cashiers, stock clerks and other low-wage positions at Walmart."

As the story spread about the food drive, more Walmart workers went on strike in Cincinnati and Dayton today, following strikes in Los Angeles, Seattle and Chicago over the past few weeks. Today, another group of low-wage workers -- port truck drivers -- walked off the job in a surprise 36-hour strike at the Port of Los Angeles.

Teamsters are supporting low-wage worker strikes because -- well, because an injury to one is an injury to all. Because the only way to rebuild the middle class is by raising wages. Because it's the right thing to do.

In Los Angeles, three Teamsters were among the 54 arrested for acts of civil disobedience during a Walmart protest. Seattle Teamsters came out to represent for Walmart strikers in the Northwest. And today Teamsters have been walking the strike line at the Port of Los Angeles since 5 a.m.

Meanwhile, a Walmart spokesman defended the food drive. He told the Plain Dealer:


This is part of the company’s culture to rally around associates and take care of them when they face extreme hardships.

Never mind that Walmart's low wages are the cause of the hardship.

Posted by Teamster Power at 2:52 PM