US spending on infrastructure nosedives 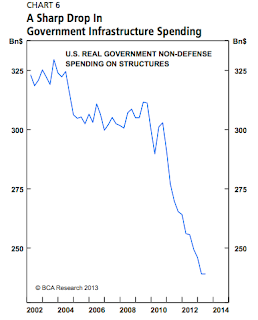 The chart tells it all.

Next time you blow a tire in a pothole, you'll know why: Government spending has plummeted for American roads, bridges and transit systems. We're well on our way to becoming a third-world country.

The naked capitalist writes that this isn't really news:


Anyone who travels at all can see how shoddy America has become. Our airports and train stations are a disgrace by international standards. Decades of underinvestment in the New York City subways has been somewhat reversed, but it will never be pleasant. ... Too many roads across the US are clearly overdue for resurfacing. I saw one road in Maine where the locals had slapped tar on either side of the yellow center line. They apparently didn’t have budget to repaint the road markings, so the resurfaced around them. Aiee!

Funding for basic infrastructure is a whopping $75 billion less than it was three years ago due to budget cuts and a gas tax that hasn't been updated since 1993,

For the last three years, state, local and federal government groups have dramatically cut spending on roads, bridges and other infrastructure.  We currently spend less than half of what we need for highway repair -- and if we continue to not fix basic issues, it will only get worse.

Unfortunately, federal, state, and local governments are only spending $91 billion annually on capital investments, meaning that each year our roads deteriorate further.

It is not just highways in need of repair.  Over a tenth of American bridges need significant repair and maintenance.  Every day, 260 million trips are taken across these dangerous bridges.

We need to refocus our priorities and start repairing our infrastructure while we can still afford to do so.  In the meantime, try to avoid the potholes.
Posted by Teamster Power at 4:45 PM