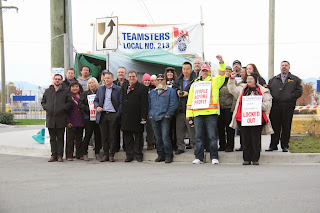 For over 180 days, more than 350 of our brothers and sisters from Teamsters Local 213 in Richmond, British Colombia, have been locked out by management at their warehouse after they refused to accept draconian wage and benefit cuts.

The IKEA workers were locked out after they twice refused to accept the furniture store's wage cuts by over 80 percent and voted for a strike mandate.  Instead of actually negotiating, the store locked workers out.  Local 213 business agent Anita Dawson, a former IKEA employee says the company just isn't interested in working to a solution:


The company has showed little interest in dealing with our issues at the bargaining table.  They seem intent on following their agenda, which involve cutbacks.  Our members are not interested  in going backwards.

The international panel, headed by Peter Lövkvist of Sweden, visited Vancouver and Richmond to determine whether IKEA's confrontational approach in Canada indicates a change for the entire company. B.C. Federation of Labour President Jim Sinclair explained:


Whether legitimate or not, IKEA has developed and nurtured a reputation worldwide as being a good employer. There is growing concern globally, however, that IKEA’s confrontational approach to labour relations at its Richmond store is a testing ground for the entire chain. This is what the panel will examine.

The Tyree reported the fact-finders were troubled by what they found:


The increasingly-fractious, six month labour dispute at IKEA's big box store in Richmond may be on the verge of a dramatic escalation -- all the way to Europe.

After listening to a wealth of emotional testimony from embittered IKEA employees during a hearing in Vancouver, international trade union representatives are pledging overseas action on behalf of the Richmond store workers, if the prolonged conflict continues.

"We will do everything we can that's in our power," declared Peter Lövkvist, secretary of the Nordic Transport Workers' Federation, which represents 400,000 union members across all five Nordic countries, including IKEA's home base of Sweden. "We're not ruling anything out."

Asked for specifics, Lövkvist mentioned measures such as publicizing the dispute in Scandinavia, demanding a "friendly" meeting with the worldwide company's top brass at its Swedish headquarters, and union members refusing to handle IKEA products. "That could include seafarers, dockworkers, longshoremen, truck drivers, warehouse workers," he said in an interview. "It depends. We could do a lot."

IKEA has been illegally replacing workers and is still trying to cut wages.  Although workers have said that they would reauthorize their current contract with a few small tweaks, IKEA refuses to listen.

Though the fight has dragged on for over six months, the locked-out workers remain strong.  One member of the fact-finding team, Erin Van Der Maas from the International Transport Workers’ Federation, wrote to Local 213 after the visit:


Your togetherness and support for each other has left a massive impression on me. It was a real honour to meet so many great brothers and sisters facing this lockout together with dignity and respect. I hope you all get the outcome you deserve - and we will be following up on this as soon as we get back to Europe.

Show some solidarity!  Let Local 213 know you stand with them as well on their Facebook page.
Posted by Teamster Power at 9:58 AM