Another murdered Colombian trade unionist – brought to you by “free” trade

On November 9 Oscar was shot dead by paramilitaries in the Colombian city of Bugalagrande. Why? Because Oscar was a union member.

Several days before his murder, Oscar’s union, SINALTRAINAL, had launched a hunger strike in front of a Nestlé factory where Oscar worked for more than 25 years. The company withdrew from negotiations several months ago and was trying to dump the union. Nestlé workers were demanding the company respect various agreements with the union.

Any worker action, especially a strike, can be a deadly one in Colombia, the most dangerous country in the world to be a union member.

The day before Oscar was killed, members of his union received death threats from paramilitaries. Amnesty International reports:


On 8 November, the paramilitary group Los Urabeños sent a death threat by SMS to the phones of José Onofre Esquivel Luna and Álvaro Varela Pérez, who are both leaders of the Bugalagrande branch of SINALTRAINAL and work for Nestlé. The death threat read: “Guerrilla fighters son-of-a-bitch you continue to mess with Nestlé [,] no more forgiveness [,] we will cut you up [,] death to all communists of SINALTRAINAL.”

This is what life is like for union members under the reign of a trade deal in a country that is notorious for anti-union violence.

Armed corporate goons like Los Urabeños have been responsible for the murders of 11 other union members in Colombia this year alone. A recent report by US Reps. George Miller and Jim McGovern concluded that threats, assaults and disappearances are on the rise. Last year 22 union members were murdered in Colombia. None of the murderers have been brought to justice.

Since its inception in 1982, SINALTRAINAL alone has seen more than 20 of its members killed by right-wing death squads. Among slain SINALTRAINAL members, 13 worked for Nestlé. The company has of course denied any connections to paramilitary violence. 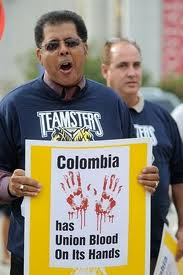 Oscar’s death is a tragic reminder of what can happen when governments enact trade deals to enrich corporations while providing no say or protections for workers – especially in a country like Colombia.

Yet that’s what is happening again with the Trans-Pacific Partnership (TPP), an anti-worker trade deal being negotiated behind closed doors by Pacific Rim countries. Among those countries is Vietnam, a country that is rife with labor abuses including sweatshop conditions, poverty wages and child slavery.

If conditions in Colombia tell us anything, it’s that without public pressure the TPP will not only allow labor rights violations to continue in places like Vietnam, it will make them worse.

Fortunately, members of Congress are waking up to the fact that trade deals that are not fully vetted hurt workers and the environment. More than 190 members of the House are on record opposing fast-track authorization for the TPP. That means they want a full debate on the entire agreement, not the quick up-or-down vote that has allowed bad deals like the US-Colombia Trade Promotion Agreement to be ratified.

Jim Hoffa wrote in the Huffington Post this week:


Fast track is an attack on democracy. Americans have been kept out of the loop on how the TPP will affect their everyday lives. The last thing we need is for politicians to fast-track a Pacific trade deal through Congress that allows them to build in secret provisions that help their campaign contributors, but hurt working- and middle-class families.

The death of union members like Oscar in Colombia is every reason for bringing the TPP into the light of day. In the meantime, workers need to hold governments accountable when they allow unionists to be assassinated with impunity. Nestlé workers in Colombia should enjoy the same rights that Nestlé Teamsters enjoy here in the U.S.!

You can sign the petition here to tell the Colombian government to bring Oscar’s murderers to justice and provide security to other SINALTRAINAL members who remain at risk.