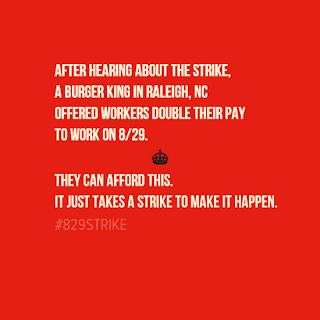 Fast-food workers on strike today continue to make history and they are showing their power in real time.

And like so many workers in America, Teamsters know that this fight isn't just about fast-food workers - it's about the dignity of all workers. That's why our brothers and sisters at Local 391 were out today supporting the fast-food strikers in Greensboro, N.C.

Workers have successfully shut down stories in many parts of the country, Reuters reports:


The strikes spread quickly across the country and have shut down restaurants in New York, Chicago, Detroit, Milwaukee, St. Louis, Raleigh and Seattle, according to organizers.

In Madison, Wisc., almost 60 workers and supporters are outside a Dunkin Donuts chanting "$15 and a union! $7.25 has got to go!" Workers in Madison also shut down a Family Dollar story after walking out today.

Here's a sampling of reports on Twitter and Facebook to give you a flavor of what's been happening today:

Boston: Another elected official out supporting workers on the strike lines in Boston!

New York: Clergy, community and workers will not be moved! View of sit-in at 5th Ave McDonald's in NYC at 6:30am this morning! 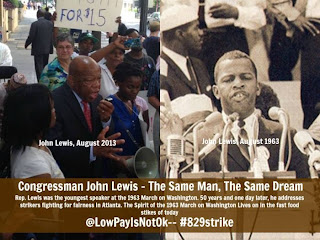 It's hard to overstate just how significant today's events are for fast-food workers and the overall movement among low-wage workers for better pay and rights on the job. Today's strikes are reaching every corner of the country, including the South.

Columbia University political science professor Dorian Warren was quoted saying that the inroads the strike movement is making today in the South is "a huge, huge deal":


The South has always been the model for low wage employment, from slavery to the Jim Crow laws, to the present. It's also the most anti-union part of the country, so the fact that workers feel empowered enough to take collective action is enormous.

The day is far from over for striking fast-food workers who will be protesting into the evening in many cities.

We'll soon know more about the full scope and impact of today's strikes. But it's safe to say that the living-wage movement in America has taken a huge step forward with today's walkouts.

Way to go, brothers and sisters!
Posted by Teamster Power at 6:41 AM