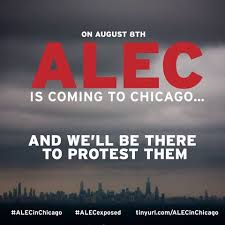 The pace of protest is quickening throughout the nation as a vast army of fed-up workers sing in the Wisconsin Capitol, disrupt a posh Chicago hotel, hold massive rallies in North Carolina or simply walk off their low-wage jobs.

Though the Solidarity Singers in Wisconsin and the Moral Monday protesters in North Carolina may be thousands of miles apart, their targets and tactics are the same. They are protesting politicians who've been bought by corporations to help them seize more power and wealth. Since April, more than a thousand protesters have been arrested for civil disobedience in Raleigh, Madison and Chicago.

Tomorrow another large protest in Chicago will take direct aim at the corporate-backed group that stands out for its lethality to workers and for the huge number of politicians who have filled its shopping bag: the American Legislative Exchange Council, or ALEC. ALEC has written hundreds of bills to outsource public education, destroy unions, raise taxes on the middle class and limit voting to its supporters. ALEC's modus operandi is to treat state lawmakers to luxury vacations and hand them legislation to empower corporations at the expense of workers and citizens.

ALEC is hosting one of its periodic confabs this week at the luxurious Palmer House in Chicago's Loop. Already an offshoot of North Carolina's Moral Monday group staged a disruption in the hotel lobby -- on Monday of course -- demanding that ALEC go home.Six were arrested. Tomorrow another large demonstration will take place outside the hotel.

The Center for Media and Democracy brings us the frightening ALEC agenda at the Chicago meeting:


Meanwhile, little notice has been given to the protests against ALEC's agenda in Wisconsin. Yesterday was the seventh day in two weeks that police arrested Solidarity Singers, a group that has met every weekday since March 11, 2011, to sing pro-union and civil rights songs inside the Rotunda. Twenty-two were arrested. Job-killer Gov. Scott Walker has been an ardent promoter of ALEC's agenda to crush unions and lower workers' wages.

One of Walker's political opponents, state Rep. Sandy Pope, was threatened with arrest yesterday for watching the singers.


Today was the 7th day of mass arrests in Wisconsin’s capitol building since July 24, 2013 when the mass arrests began...

According to WMTV, today August 6th, 22 people were cited for not having a permit and one of the 22 also got a disorderly conduct ticket.

A tally that Jason H. has been keeping shows that capitol cops have dispensed 168 citations and 6 misdemeanors to singalong participants since July 24th.

We understand some of the Solidarity Singers may be on their way to Chicago...
Posted by Teamster Power at 4:16 PM