How to talk about low-wage strikers 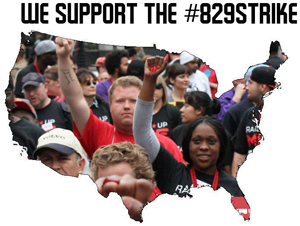 Are you dreading the prospect of talking to your right-wing uncle over the Labor Day weekend?

When the subject of low-wage worker strikes comes up, here are things you can say in response to the predictable anti-worker arguments you'll hear:
Finally, remind your right-wing relatives that Labor Day is about honoring workers -- ALL workers!
Posted by Teamster Power at 3:25 PM