Hundreds of California Teamsters rode to Bakersfield on their bikes and in their big rigs today to rally for immigration reform.


Hundreds of immigration reform activists from Los Angeles and thousands from across the state traveled by car, bus and motorcycle to Bakersfield Wednesday, hoping to get their message out to a key lawmaker.

Organizers are calling it the largest caravan in California history.

Activists held a rally at the office of Rep. Kevin McCarthy, R-Bakersfield. They say he along with the top Republican leaders have been dragging their feet when it comes to immigration reform, and they need him to act now.

"The message to Congressman McCarthy, the third-ranking GOP member in the House, our representative, is we want a vote on immigration reform with a path to citizenship now," said Jorge-Mario Cabrera, with the Coalition for Humane Immigrant Rights of Los Angeles (CHIRLA).

Thousands of labor workers from across the state also made the journey. Since the Senate passed an immigration bill in June, activists have been out in force trying to convince House Republicans to do the same. 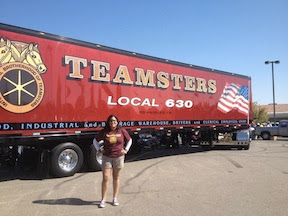 Stacy Hendler Ross of the South Bay Labor Council reported on the kick-off event at the Labor's Edge blog:


In the working class East San Jose neighborhood where Cesar Chavez’s family first landed upon moving to San Jose when he was a child, a small but passionate group gathered. In front of the home of Cesar’s younger brother, Librado Chavez, a carpenter and member of Local 405 for 60 years, they chanted the motto that Cesar transformed from “Sal, si puede” (Get out if you can) to “Si se puede” (Yes you can).

After songs like “Picket Line”, harkening back to the days of demonstrations led by Cesar Chavez, Librado urged Americans to join the critical effort to push the U.S. Congress toward commonsense immigration reform...

The event launched the San Jose part of a statewide caravan to Bakersfield to pressure Republican Congressman and Majority Whip Kevin McCarthy to use his influence to pass commonsense immigration reform. Groups from throughout California will also gather at McCarthy’s home office on September 2nd, Labor Day, for a united demonstration.

We're proud of our brothers and sisters who went to Bakersfield today!
Posted by Teamster Power at 5:05 PM