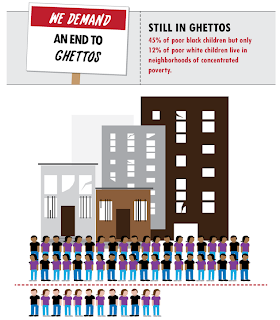 Today is the 50th anniversary of the 1963 March on Washington for Jobs and Freedom.  Marchers, including Teamsters from across the country, gathered in Washington, DC to call attention to civil rights issues, especially the need for good jobs for all people.  This series focuses on how well (or not) our society has met the 50-year-old demands of the marchers. So far, we’ve discussed the decline of the minimum wages, gaps in labor law protections, underwhelming federal focus on job training programs, and the impact of continuing segregation in schools.

Between the struggle for better jobs and political freedom was a fight that hit closer to home.

Marchers demanded access to equal housing opportunities, as African-Americans across the country struggled to find affordable and safe housing equivalent to the options that white households had.

They demanded that the president sign “an Executive Order banning discrimination in all housing supported by federal funds” and that decent housing would be guaranteed to all Americans in a “comprehensive and effective civil rights legislation from the present Congress.”

Discriminatory housing was so prevalent across the country that a satellite protest for the March on Washington in Seattle focused exclusively on expanding open housing.

In response to public pressure, both demands were met – and exceeded. The Civil Rights Act was expanded in 1968 to guard against racial, sexist, religious, and other forms of discrimination in all sectors of the housing market. Various executive orders have also strengthened the federal government’s commitment to ending housing discrimination. Today, the Department of Housing and Urban Development’s Fair Housing Program focuses on providing equal access to housing for all Americans.

Although housing discrimination is now illegal, segregated communities are commonplace, especially in denser areas. Cities have been devastated by the housing crisis that began with banks' predatory lending and concluded with aggressive, often illegal foreclosures. The National Community Reinvestment Coalition reports that more than 10.5 million properties went into foreclosure in the 53 months beginning January 1, 2007. And,


...up to 12 million more foreclosures were projected from the fourth quarter of 2008 to 2014... .As of December 12, 2010, 1,762,694 borrowers were seriously delinquent (i.e., over 60 days delinquent, or over 30 days delinquent in case of bankruptcy) ... The total equity lost by families with recently foreclosed properties is estimated at $5.6 trillion... In addition, an estimated $502 billion in property value has been lost due to nearby foreclosures.... The effects of the economic crisis have been enormous, both nationally and globally, and the confidence Americans once had in homeownership as a path to wealth has been shaken. Current and future generations will be impacted for decades to come.

Fifty years after protesting for an end to housing discrimination in the city, a 2011 fair housing test in Seattle found that over half of the properties tested showed evidence of illegal discrimination. Two-thirds of properties gave better terms to white homebuyers and renters.

The US Department of Justice says on its website that:

Race discrimination in housing continues to be a problem. The majority of the Justice Department's pattern or practice cases involve claims of race discrimination. Sometimes, housing providers try to disguise their discrimination by giving false information about availability of housing, either saying that nothing was available or steering homeseekers to certain areas based on race.Because potential homeowners are often not aware of the manipulation, it becomes very difficult to fight the discrimination.

Regardless of how illegal housing discrimination has been for decades, race is still more predictive of housing status than income.

African-American, American Indian, and Latino children are between six and nine times more likely than white children to live in areas with a high concentration of poverty.

The effects are very clear. Neighborhoods with high levels of poverty have fewer educational opportunities, higher crime rates and higher costs for private investment and businesses – exactly where families do not want to live.

Continued housing discrimination, especially a generation after the government supposedly solved it, is a disgrace. It is time to march again.

Posted by Teamster Power at 5:39 PM