Americans angrily watching their standard of living decline look for blame in two places: above them, at predatory corporations and greedy billionaires, or below them, at people who need government help to survive.

We often point out that the predatory corporations and greedy billionaires also need government help -- a lot of it. Take Walmart: The six Walmart heirs own more than the bottom 40 percent of the U.S. population, according to Sen. Bernie Sanders. And yet Walmart couldn't employ its army of low-wage workers if the U.S. government didn't step in with Medicaid and food stamps (not to mention subsidizing the operations of its air fleet).

David G Perry gets it:


Poor people are not the problem ! Corporate welfare is !!

Lots of Teamsters and allies get it, in fact. We posted this badge on our Facebook page recently. See the responses below: 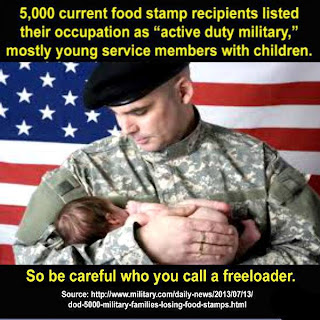 Elizabeth Luise The point is that anyone who is an E1 to E3 is living in poverty and if they can't get base housing they're really screwed. The number should be bigger. The shame of it is they're asked to put their life on the line for us and we keep them in poverty because of ignorant people following the GOP who think it's better to give someone the finger instead of a hand.

Kymberly Lewis The point being - you don't KNOW the circumstances of those on food stamps. The single mom in the nice car? - it's her boss's car, he let her borrow it until she can afford to get hers fixed. The lazy freeloader who is able-bodied? - he has extreme PTSD and no access to mental health care. The "welfare queen" with the brand new, pretty finger nails? - her best friend paid for those as a birthday gift.

The point being - judge not lest ye be judged. I'm not Christian - but damn it if that isn't great advice.

Roger N Esta Shelton Uh, I'm sorry, but if it were only ONE food stamp recipient that listed their occupation as "active duty military," that would be too damn many!

Carol Ann Rose This is to those that think that people are collecting food stamps are not working. You are so wrong and why are you so jealous in the first place? Most people are working, but can't make ends meet on $7.25 an hour and besides, who knows, you just might be the next person that needs a little help. So keep quiet and Thank God that you are not there yet. God said to help the people.

Alan Nejmeh That is why we need a minimum Livable Wage in this country for all nationalized citizen and adults. No exceptions! Then you will see a real economy with people that would be able to live.

Bernadette Catherine Jo Cox Look, I work and have since I was 16 and I am not ashamed that for the last 13 years I have received assistance (my daughter is 13). I have worked 2 jobs, put myself through school, received no child support and he still has yet to be arrested or be in contempt when making an effort of $5 for three months is ok. It PISSES me off when people say people on assistance are free loaders. I have always had nice cars that my parents paid for, a cell phone that they paid for and clothes they paid for -- NOT ME. You know since I was busy holding down a minimum wage job going to school full time and being a single mom. They did those things to help me to get where I am today: teaching college, supporting myself and helping them out. Don't judge people, help them. Of course there are people who abuse the system. Report them. Don't look at my 5-year-old car and cell phone and name brand clothes from Goodwill and call me lazy. Folks, I busted my ass to get a college degree and I went without things that were basic necessities -- not wants. But family and friends helped me along the way. The state bought food, daycare and covered health insurance for my child, I qualified for help for me and cash but I never once took it, I just needed the basics. As far as military families on food stamps that's just well fucked up. These men n women put their lives on the line. Meanwhile, the pro athletes are millionaires? Priorities, people, come on!

Elaine Taylor Amen, judge not. Had a man get pissed off when me and my small children were in Mc D's after Christmas. It was a gift card.

Posted by Teamster Power at 9:27 AM