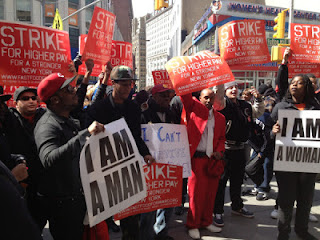 Today thousands have descended on Washington, D.C, to mark the 50th anniversary of the historic March on Washington. Tomorrow hundreds of fast-food workers will strike in cities across the country in an ongoing movement to win the demands of the 1963 March on Washington for Jobs and Freedom. And just yesterday, truck drivers at the Port of L.A. staged the first-ever one-day strike to protest retaliation for trying to form a union.

Speakers at today’s commemoration in D.C. are paying homage to Dr. Martin Luther King’s famous “I Have A Dream” speech. But 50 years later, King’s dream of economic and racial justice is still just a dream for thousands of working-class Americans who are jobless or stuck in low-wage jobs.

As we have reported here, one of the demands of the March on Washington was “A national minimum wage act that will give all Americans a decent standard of living.” Organizers in 1963 said “anything less than $2.00 an hour fails to do this.” That’s the equivalent of $15.27 an hour today.

Today’s minimum wage of $7.25 an hour shows just how little economic justice has been won since King led the March on Washington


Millions of solid middle-class jobs disappeared during the last decade because of the recession and unfair trade agreements. By a three-to-one margin, they have been replaced by those in low-wage occupations. Jobs that used to be the first step in the economic ladder for teenagers and college students are now filled by adults trying to pay their bills.

And all of this is happening when the nation's corporations are doing better than ever. Sales are going through the roof while workers are being forced into untenable situations.

The demand for better jobs with living wages and dignity in the workplace is inseparable from the spirit that moved 250,000 people to march on Washington 50 years ago. While many of the formal barriers to racial equality have fallen since then, the economic barriers that keep so many Americans living at or near the poverty line are as strong as ever.


And the erosion of the achievements made by King’s struggle is multi-layered. When the Supreme Court gutted the Voting Rights Act earlier this summer, it put its stamp of approval on voter suppression laws that protect corporate power against workers and the poor.

"The fierce urgency of now” that King talked about in his “I Have A Dream” speech continues to inspire the bravery of low-wage workers who have been waging aggressive strikes in the fast-food, retail, trucking, and warehouse industries.


Increasingly…we are seeing workers stand up for their rights. Walkouts have become commonplace. They know they are getting a raw deal and are revolting. Whether it's one-day strikes by warehouse, retail and fast-food workers or on-going protests in North Carolina, Ohio and Wisconsin, the American public is demanding to be heard.

People are joining together to raise awareness about the plight of low-wage workers in this country. And more and more each day are realizing the unfairness of the system.

The Teamsters are supporting the port truck drivers in L.A. who returned to work today after a successful one-day strike yesterday against Green Fleet Systems. They are part of the broad movement that includes workers at Walmart, warehouses, government contractors and fast-food chains.


Five years after the original March on Washington, King launched the “Poor People’s Campaign,” which he saw as the second phase of the civil rights movement. The campaign included demands for an “economic bill of rights” and living wages for all workers.

King was assassinated later that year in Memphis while supporting striking sanitation workers, some of whom made as little as 65 cents an hour.

Standing in this proud tradition, fast-food workers will strike in cities nationwide tomorrow, demanding a $15 an hour wage and the right to organize without retaliation.

These workers won’t be speaking from the stage at the National Mall today, but they are the real heroes honoring the legacy of King. They are confronting the powerful forces that continue to stand in the way of King’s dream – forces that include political and corporate bosses who pretend to celebrate the March on Washington while at the same time dismissing the demands of low-wage workers.

If King were still alive, today he would march. But tomorrow he would be out on the picket line with fast-food workers.
Posted by Teamster Power at 3:01 PM