Today in 1934: Minneapolis Teamsters Vote to Strike All Trucking Companies 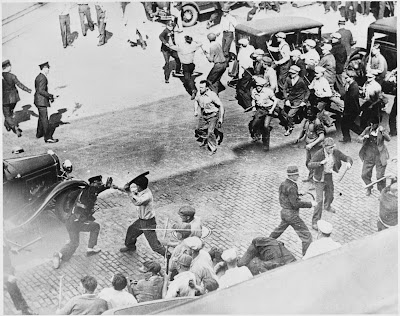 It was springtime in Minneapolis during a year when the American labor movement was making itself known in radical fashion throughout the country. The year was 1934, a time when labor unrest was not simply defined by strikes and civil disobedience. Police batons were wielded at workers, live ammunition was fired, National Guard troops were deployed, blood was spilled and lives were lost.

And Teamsters were at the center of it all.

On May 15, 1934, the 6,000 members of Teamsters Local 574 in Minneapolis voted to strike all trucking employers, demanding recognition and wage increases. The vote signaled an escalation in what some remember as the "Teamster Rebellion," a wave of strikes that nearly shut down the city and put the still-young Teamsters Union at the forefront of organized labor.

The general truckers' strike vote on May 15 followed a Teamster strike in February that shut down almost all the coal yards. The demand for coal in the winter brought a quick end to the strike, securing a rise in membership for Local 574.

The militant organizing agenda of Local 574 was inspired largely by the leadership of the union such as Carl Skoglund. Having recruited others, including Farrell Dobbs and Grant and Miles Dunne, into a large organizing committee, the union sought to build on the momentum of the coal yard strike by preparing for a general strike.

In the wake of the Great Depression with unemployment still high, the challenge of using strikes was plain to see. That's why Local 574 partnered with Minneapolis unemployed organizations to win the support of jobless residents before the strike. It also teamed up with the Minnesota Farm-Labor Party. 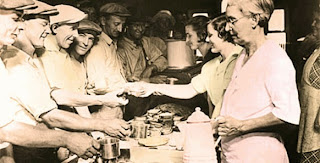 The strike was launched on May 16. Teamsters who had pioneered the use of cruising picket squads in the coal yard strike employed them for the general strike, carrying pickets by truck to chase down and stop scab trucks from operating.

One hundred Teamsters formed the strike committee and the strike headquarters - a big garage equipped with a makeshift hospital and commissary - was itself a massive operation. Mothers, wives, daughters and sisters were essential to the efficiency of the strike. Local 574 organized a women's auxiliary to care for hungry and injured strikers - many of the women also joined Teamsters on the streets and joined the ambulatory pickets. 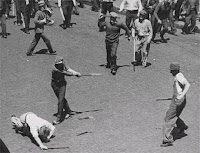 A major skirmish erupted between strikers and police on May 21 in the central market where all truck movement had come to a standstill. Six hundred picketers hidden in the nearby American Federation of Labor headquarters emerged and pushed back hundreds of cops and scabs deputized to help break the strike. The confrontation turned to hand-to-hand street fighting between the two sides with several cops hospitalized. In the end the picketers cleared police and scabs from the area and began directing traffic.

On May 25, a settlement was reached in which the companies agreed to recognize the union for drivers and warehouse workers. But in the ensuing weeks it became clear that employers had no intention of carrying out the agreement. So another strike was called in July. To beat back the employer-dominated media's demonization of Teamsters, the union started The Organizer, the first daily newspaper issued by a labor union. Trucking was shut down as well as other services as other unions joined the strike in solidarity with Teamsters. On July 20, also known as "Bloody Friday," police opened fire and killed two strikers, John Belor and Henry Ness. A hundred thousand attended Ness's funeral.

Several days later, the governor declared martial law and deployed National Guard troops who seized the strike headquarters and jailed union leaders. After they were released, Local 574 reached out to the Central Labor Union to expand the fight to a general worker strike. In the meantime, martial law took a toll on the strike's success as some scab trucks were able to move under military permit. But by the end of the summer, the union won its primary demands from Minneapolis employers through a federal mediator.

In his book, Teamster Rebellion, Dobbs explained how the desperate conditions of workers meant that militant action was the only solution for Teamsters in Minneapolis:


Wiseacres of the day spoke pontifically about the “passivity” of the working class, never understanding that the seeming docility of the workers at a given time is a relative thing. If workers are more or less holding their own in daily life and expecting that they can get ahead slowly, they won’t tend to radicalize. Things are different when they are losing ground and the future looks precarious to them. Then a change begins to occur in their attitude, which is not always immediately apparent. The tinder of discontent begins to pile up. Any spark can light it, and once lit, the fire can spread rapidly.

In Minneapolis the flames were bound to become widespread because it was not only the coal workers who were being driven toward action to correct an increasingly intolerable situation. Conditions were bad throughout the entire trucking industry. Wages were as low as ten dollars and rarely above eighteen dollars for a workweek ranging from fifty-four to ninety hours.

The Local 574 strike had defeated the city's powerful employer organization, the Citizens Alliance, and shifted industrial labor relations nationwide. It also set the stage for the unionization of thousands of over-the-road drivers throughout the Midwest. The backdrop to the Teamster strike was a nation generally electrified by labor militancy. The turbulent year of 1934 also saw two other major strikes, the 1934 West Coast Longshore Strike and the 1934 Toledo Auto-Lite Strike.

The 1934 Teamster strike in Minneapolis remains one of the most pivotal moments in the history of our Teamsters Union.

Check out videos that further tell the story of this historic Teamster event.
Posted by Teamster Power at 3:25 PM