This Memorial Day, as we honor the men and women who gave the ultimate sacrifice for their country, we are paying tribute to our Teamster military heroes and the Teamsters Military Assistance Program (TMAP).

In the last issue of Teamster Magazine, we introduced you to Jerry Winkler, a Local 416 Teamster who, in his capacity as an Air Force Reservist, took part in an action to save a Kurdish community from the ISIS terrorist group.

But Winkler is far from the only Teamster who proudly wears his military uniform while keeping a firm grip on his union card. Thanks to an innovative training program for veterans, even more of those who have served in the armed forces have the opportunity to transition to Teamster jobs.

Teamsters, through TMAP, have been assisting veterans in obtaining careers in the transportation industry for years.
In the next issue, you’ll meet several more people enlisted in the military who are transitioning to good jobs thanks to the Teamsters Union … people like Fiona O’Brien. From the story in the next issue:


Fiona O’Brien was among the first group of a dozen graduates that have completed the TMAP program at Fort Sill. The 16-year Army veteran had been deployed three times to Afghanistan, but when she completed her service, O’Brien needed to think of her next steps.

“It’s hard for many veterans to get out and find a job, to transition from Army to civilian life. This program gives us one less thing to stress about,” said O’Brien, who is now working for ABF Freight in New Jersey.

The story details what happened during a recent ceremony at Fort Sill, Okla., honoring graduates of a program that helps military personnel transition to a career in transportation:

Recently, Teamsters General President Jim Hoffa took part in a ceremony recognizing soldiers like Pitkin, the first graduates of a program that helps active military personnel transition to a career in transportation. The ribbon-cutting ceremony was held to inaugurate the Army’s new Industrial Training Complex (ITC) in Fort Sill, Okla.

“This transition is seamless because the Teamsters, ABF and the Army are partnering. They’ve shown they care about veterans. The impact that this has on soldiers coming out is a tremendous thing,” Pitkin said. 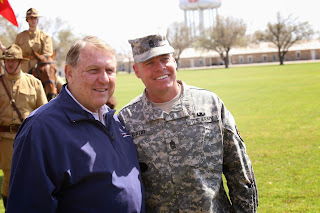 In the next issue, you’ll also read about Covina, Calif.’s Local 396, which has been recognizing veterans at monthly membership meetings, bestowing special Teamster veteran jackets to members of the local in each branch of service.


In the meantime, enjoy this Memorial Day with family and friends -- and don't forget to stock your barbecue activities with American-made, union-made products.
Posted by Teamster Power at 1:00 PM