Big banks need to be shown who's boss 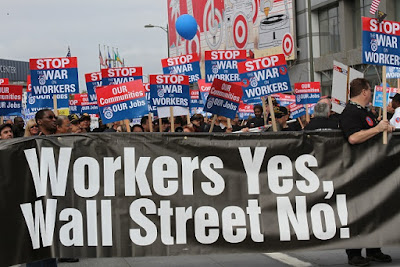 Wall Street's continuing war against workers seems endless. Just when you think it can't get any worse, it does. And even when big players in the financial world get caught for wrongdoing, the penalties never seem to make a difference.


The latest example came last week when the Justice Department announced that five major banks -- Citicorp, JP Morgan Chase, Barclays, The Royal Bank of Scotland and UBS -- were pleading guilty to felony charges and agreeing to pay more than $5 billion to settle charges they had worked together to manipulate international interest and foreign currency exchange rates.
Yet despite the "brazen" activity by the banks, as Attorney General Loretta Lynch put it herself, no one ultimately will spend a day in jail for engaging in these illegal activities. That, said former Clinton Labor Secretary Robert Reich, is simply outrageous:

America used to have antitrust laws that permanently stopped corporations from monopolizing markets, and often broke up the biggest culprits.

No longer. Now, giant corporations are taking over the economy – and they’re busily weakening antitrust enforcement.

The result has been higher prices for the many, and higher profits for the few. It’s a hidden upward redistribution from the majority of Americans to corporate executives and wealthy shareholders.

The bad behavior of banks is nothing new for hardworking Americans, who have taken the brunt of the financial world's malfeasance. They've seen Wall Street fritter away their pensions and retirement investments and jeopardize their future. Financial institutions teamed up with big business last December to push through a federal spending bill that attacked workers' pensions and put their retirements at risk.
The same Wall Street banks that rake in hundreds of millions of dollars managing pension funds lobbied to reduce pension benefits for the people whose sweat created those funds. Congress did the bankers' bidding and reduced benefits, but the banks get to keep making millions on the backs of the very pensioners whose benefits were cut. That is unfair, unjust and plain un-American.
It's well past time for the big banks to face the consequences of their actions with punishments that have real teeth. Penalties need to be higher than any bank would pay just as part of the cost of doing business.

It's also time that financial institutions pay their fair share of taxes instead of receiving breaks while workers pick up the tab. Sen. Bernie Sanders (I-Vt.) previously put forward a Wall Street speculation tax proposal that would charge a fee on large financial institutions for the sale of credit default swaps, derivatives, options, future and large amounts of stock. It's an idea with merit.

Banks have continually abused the benefits given to them. It's only fair that people get treated the same as the powerful. That's what's going to get America working again.
Posted by Teamster Power at 12:17 PM