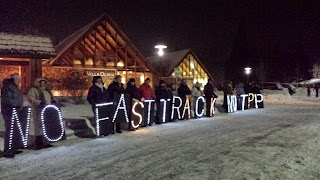 The Senate earlier today voted to limit debate of fast track legislation and to proceed to a final vote as early as tomorrow. Teamsters General President Jim Hoffa said the decision hurts workers, but is not the end of the story on this issue:


For years, the Teamsters and our fair trade allies have stood up for workers and all Americans by fighting to stop fast track. Unfortunately, too many lawmakers in the Senate today decided to side with the big business agenda instead.

Despite this legislative setback, however, the war is far from over. We will continue this battle in the House of Representatives, where we know opposition to fast track is strong. A bipartisan collection of lawmakers in the House understand it makes no sense to give a quick up-or-down vote to bad trade deals like the Trans-Pacific Partnership (TPP) that will only ship jobs overseas and lower wages in the U.S.

Fast track is a vehicle that will speed a race to the bottom for our nation’s economy. It will allow currency manipulation to flourish under the TPP and could leave U.S. taxpayers on the hook to cover the costs of foreign corporations who sue our government seeking compensation for laws they don’t like.

The future of America and for hardworking Americans isn’t better with fast track. And that should be the most important consideration.

As the Senate moves forward with debating fast track, it is scheduled to discuss currency manipulation and corporations filing suit against governments, known as investor-state dispute resolution. There is no reason lawmakers should be jeopardizing this nation's economic health by opposing both measures!

But regardless of the final outcome in the Senate, the Teamsters and their fair trade allies are not giving up. As Congress heads home for Memorial Day, the Teamsters will continue with efforts to educate Democrats and Republicans in the House about how fast track is the wrong track for America. And they will meet with members in their district offices and let them know they are jeopardizing the livelihoods of their constituents if they approve this measure.

This is not about being against trade. It is about sticking up for what America is supposed to stand for – a place where an honest worker can earn an honest wage that supports a family. Lawmakers shouldn’t be turning their back on those they are supposed to represent!
Posted by Teamster Power at 3:12 PM