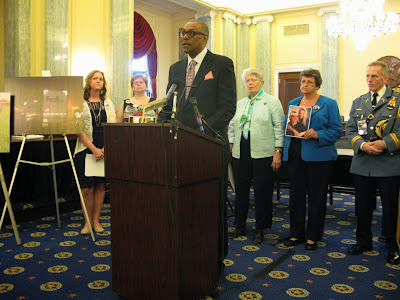 The event was held as the Appropriations Committee considers the House Transportation, Housing and Urban Development (THUD) Appropriations Bill for 2016, which includes "riders" that will force truck drivers to work longer hours and drive larger, heavier trucks.

LaMont Byrd, Director of the Teamsters Safety and Health Department, spoke to press this morning along with highway safety advocates and the colleagues and families of those killed in truck crashes:

I join with other safety-minded groups and these brave families who have suffered such personal loss, to lend the Teamsters voice in denouncing the roll back of critical safety measures through the actions of the House Appropriations Committee and call upon the Senate to not go down this same dangerous path.

Over 600,000 of our 1.4 million members start their workday by turning a key in a vehicle; and whether they drive a school bus, a UPS van, or an 18-wheeler, our nation’s highways and local roads serve as their workplace.

Others who spoke at the D.C. event this morning included Jackie Gillan, president of the Advocates for Highway and Auto Safety; Capt. Robert Kneer, a NJ police officer whose colleague was killed in an truck accident; former NHTSA Administrator Joan Claybrook; and Lisa Shrum, whose mother and step-father lost their lives in a crash involving a FedEx double trailer truck.

As the joint-press advisory that went out before the event argues, this is no time for Congress to be loosening safety rules for trucks:

Truck crash deaths and injuries are up dramatically, yet at the same time Congress is considering major anti-truck safety changes which will make our streets and highways more dangerous and deadly. These safety assaults being pushed in Congress by special trucking interests will overturn the law in 39 states to benefit select corporations like FedEx to allow the use of double 33’ trailers throughout the country.

[The changes will] increase working and driving hours up to 82 hours per week and eliminate the “weekend” off for long haul truck drivers despite clear evidence that it results in overworked and fatigued truck drivers. The bill will make permanent the egregious safety rollback sponsored by Sen. Collins (R-ME), with the support of special trucking interests that was tucked into the major government spending bill passed by Congress last December.

Last year truck safety and the dangers posed by having tired truck drivers on the highway was thrust into the limelight when comedian/actor Tracy Morgan was nearly killed on the NJ turnpike by a Walmart truck operated by a driver who hadn't slept in 24 hours. Just two day later, Sen. Collins quietly slipped an amendment into the Omnibus spending bill to eliminate the two-day rest period requirement for truckers.

With truck crash fatalities up 17 percent and injuries up 28 percent in last four years, Congress is contemplating changes to make a bad situation worse. Trucking industry profits might be served by these deadly changes, by workers and the driving public certainly are not.

There is no justification for increasing 28 foot double trailers to 33 feet. Unless, that is, you take seriously a report written by the trucking industry that is pushing for this change. These longer configurations mean greater stopping distances. Our merging lanes aren’t designed for these longer trucks to get up to the speed they need to safely merge, and most of our off-ramps aren’t designed for longer heavier trucks.

Including provisions in an appropriations bill that would effectively continue the suspension of the use of the once-a-week 34 hour restart and the two 1 a.m. to 5 a.m. rest periods will only worsen driver fatigue, as some employers will push their drivers to work over 80 hours per week – twice the normal workweek for most people!

As we make the necessary investments and improvements in our infrastructure to build the transportation capacity needed to compete in the global economy, we cannot afford to let highway safety be a second thought. These end-around attacks through the appropriations process are a bow to special interests at the expense of everyday people who share the roads and highways with commercial drivers.