Teamsters protest in Mo. Capitol against right to work 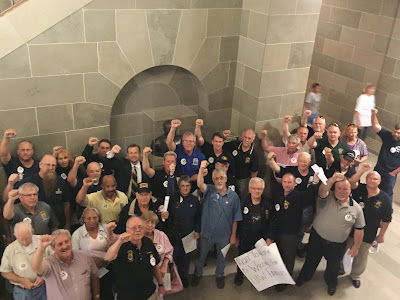 Another battle is raging in the state of Missouri against a right-to-work-for-less legislative attack on unions. And Teamsters are on the front line with other union members fighting for American workers.

On Monday, workers and union leaders stormed the Missouri Capitol as state lawmakers heard testimony on the proposed bill to make the "Show-Me-State" the 26th "right to work" state in the country.

The bill's sponsor, Rep. Eric Burlison (R-Springfield), had this to say in response to opposition to his anti-union project:


Opposition will say that people make less money in states that provide right to work. The truth is, we’ve always made less money. 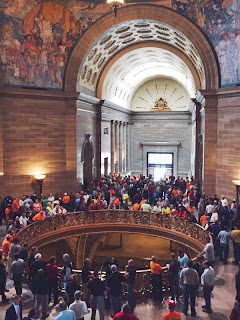 Way to set the bar low for workers, Burlison. There's no denying that wages are lower in right-to-work states. So ALEC-aligned politicians in the Missouri statehouse want to remind folks that (non-union) Missouri workers have always suffered low-wages -- and apparently they want those wages to fall even more, for union and non-union workers alike.

The right-to-work bill passed the Missouri House earlier in the session and the state Senate is taking up the measure today.

Hundreds of workers, including Teamsters from Local 618 and others, are making their voices heard against the latest corporate assault on working families. Missourians have packed the gallery and overflow room of the Capitol while the Senate debates the bill.

We've seen a lot of anti-worker schemes come out of ALEC's bag of tricks in recent years. But "right to work" still appears to be the preferred weapon against workers and their unions. 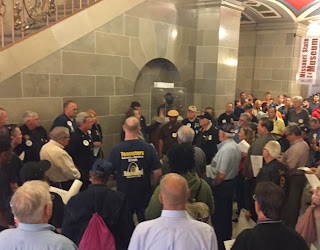 By preventing unions from collecting dues for representation, unions are drained of resources and less equipped to fight on behalf of workers. While most member-based organizations outside the labor movement require members to pay dues in order to keep the organization running, "right to work" laws strip unions of the their ability to do the same.

Fortunately, every time these laws rear their heads in states across the country, workers and their families can be counted on to rise up against them - just like our Teamster brothers and sisters are doing right now in Missouri.

What happens in Missouri matters to all workers today. Keep up the fight!
Posted by Teamster Power at 2:25 PM