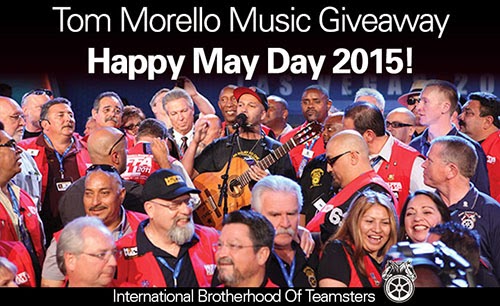 Today is May Day, International Workers' Day, a day for workers around the world to celebrate the struggles and successes of the global labor movement.

Although May Day is celebrated worldwide, it's less observed in the U.S. - an irony considering that May Day began in the U.S. to commemorate the anarchist martyrs of the 1886 Haymarket riot and the fight for the eight-hour workday.

That's no accident. In 1894 President Grover Cleveland, alarmed by the radical unionists promoting May Day activities, proclaimed the first Monday of September as a national holiday in an effort to detract from May Day, hoisting up Labor Day as a holiday heralded by moderate union members.

In recent years, May Day has made a comeback in the U.S., thanks in large part to the immigrant rights movement which is led by workers bringing this international holiday from abroad back to its roots. Other sections of the U.S. labor movement have sought to revive May Day in the U.S. as well.

The need for a global day of labor action is more important today than ever as the globalization of corporate power signals the urgency for the globalization of workers' power. From the garment workers' struggles in Bangledesh and Central America to the living wage battles at mega retailers in the U.S. selling garment workers' products, worker abuse is connected like never before.

That's why May Day is about the labor movement as an internationalist movement.

And continuing our yearly May Day tradition since 2013, the Teamsters have partnered with our good friend and guitar legend Tom Morello, a passionate trade unionist formerly from the political rock group Rage Against the Machine.

Tom now plays his strings for working-class power as "The Nightwatchman." We've teamed up with Tom to giveaway his Union Town labor ballads today only in celebration of this special day for workers everywhere.

As Tom said to Teamsters in an interview in 2013, the Union Town giveaway is about giving a soundtrack to May Day and our year-round labor actions:


There’s never been a successful social justice struggle without a great soundtrack. From the Civil Rights Movement to the anti-war movement to the labor movement, songs have been a great unifier of the working class. Often people of disparate cultural backgrounds can unite around a love of music, and when it contains a potent class-conscious message, those songs have been an important part of steeling the backbone of those involved in labor struggles throughout American history.

Part of the reason of doing this record and giving it away on May Day is to re-educate people in this country about the importance of May Day as a day that celebrates our struggles and celebrates our victories. It celebrates the long history of people in this country boldly standing up and sometimes sacrificing their lives for things that we take for granted. Things like the weekend, the fact that children are not working in coal mines, and the protections we have on the job. Those are things they fought tooth and nail against and we only have them because of the historic struggles of the labor movement.

The leadup to this year's May Day was full of action for Teamsters. In Los Angeles and Long Beach, Teamster-backed port truck drivers celebrated May Day on the picket line as they ended four days of striking against wage theft and misclassification. They haul goods made by other workers halfway around the world supplying American industries and businesses.

May Day reminds us that Teamsters and workers worldwide are in the same labor struggle for justice and dignity.

Happy May Day!
Posted by Teamster Power at 2:22 PM