We've had 20 years of broken promises from trade agreements. Let's not have any more. 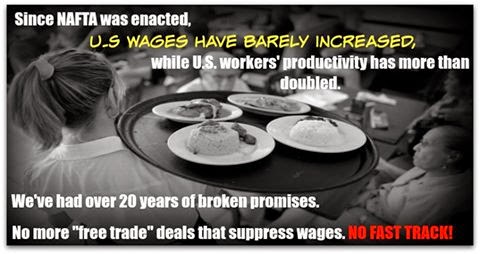 Pretty soon the world will learn how badly the U.S. government broke its promises about the trade deal with South Korea.

There isn't any way the treaty known as KORUS lived up to its advance billing. We were promised it would increase U.S. exports from $10 billion to $11 billion.

We were told it would support 70,000 American jobs from increased goods exports alone.

After two years, it cost 60,000 U.S. jobs, most of them good-paying jobs in manufacturing.

It is now extremely unlikely the United States recovered from those losses and met the promises made three years ago by KORUS supporters.

Caterpillar, Inc. lobbied for NAFTA claiming it would stop the company from outsourcing jobs. By 2008, Caterpillar laid off 338 workers in Illinois and moved their jobs to Mexico, while 105 workers lost their jobs at Caterpillar's Georgia plant because of imports from Mexico.

How about Colombia? Remember how a trade deal with Colombia was going to end the violence that made it the worst country in the world to be a trade unionist?

That didn't happen either. The violence in Colombia got worse. There were four more union leaders murdered in 2013 than in 2012.

In El Salvador, unemployment increased by 71 percent. Unescorted children -- CAFTA kids --  created a crisis at the U.S. border as they tried to escape the violence in El Salvador, Honduras and Guatemala.