Right to work on the march in NM, WV, MO and IL 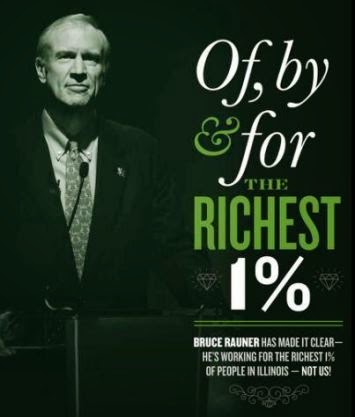 Illinois Gov. Bruce Rauner dropped a Scott-Walker-like bombshell on Monday when he issued a right-to-work order for government workers.

At the same time right-to-work bills moved through the Missouri Legislature, where they are expected to be voted on this week.

And anti-worker lawmakers in New Mexico and West Virginia are pushing forward right-to-work bills in order to satisfy their billionaire backers.

Brothers and sisters, it's time to fight back against these efforts to make America even more unequal than it already is.

Rauner, a billionaire loyal to his class, says it's wrong for workers to pay unions to represent them. The New York Times reports:


Gov. Bruce Rauner, the newly elected Republican who has often criticized public sector unions, took his first step toward curbing their power on Monday by announcing an executive order that would bar unions from requiring all state workers to pay the equivalent of dues.

Mr. Rauner, who faces a Democratic-controlled legislature with strong ties to labor, took the unilateral step saying that he believed those fees violate the United States Constitution.


Bruce Rauner’s scheme to strip the rights of state workers and weaken their unions by executive order is a blatantly illegal abuse of power. Perhaps as a private equity C.E.O., Rauner was accustomed to ignoring legal and ethical standards, but Illinois is still a democracy and its laws have meaning.

Last night, a Missouri House committee passed a right-to-work bill by a vote of 6-3. Teamster retiree and state Rep. Bob Burns, a member of the committee, objected righteously. The bill is expected to be voted on this week.


With an even larger Republican majority, the Missouri House is expected this week to take up – and possibly approve – legislation aimed at making Missouri the 25th “right-to-work” state in the country by curbing union rights.

What makes this year’s battle particularly intriguing is that, like last year, it pits the current Missouri House speaker against a GOP predecessor who now is a union lobbyist.

And of course out-of-state, Koch-backed lobbyists will be in Missouri to fight for the right-to-work law:


Greg Mourad, vice president of the National Right to Work Committee, said his group was preparing to lobby Missouri legislators to pass a right-to-work bill.