Anti-TPP activists rally from coast to coast against Fast Track

All over the United States this week, American citizens on the left and on the right are rallying against a Fast Track bill to let Congress rubber stamp the TPP. The targets are members of Congress who haven't said where they stand on the issue.

The TPP, or Trans-Pacific Partnership, would send U.S. jobs overseas, lower wages, raise the cost of medicine and imperil food safety and the environment. TPP supporters want to pass Fast Track so Congress can send the secretly negotiated deal to the president before the public wakes up and realizes what happened.

Sen. Orrin Hatch, a Utah Republican, said he wants to introduce a Fast Track bill by the end of this month.

If we stop Fast Track, we stop the TPP.


A coalition of community, labor and environmental groups held a rally outside U.S. Rep. Jared Polis' office in Boulder on Tuesday. They want Polis, a Democrat, to oppose President Obama's request for "fast track" authority for the Trans Pacific Partnership, a trade deal involving the United States and 11 other countries.

The story was the same in the Pacific Northwest, where a Fair Trade or Bust! bus set out yesterday on a two-day tour. Washington and Oregon residents let lawmakers know the impact the trade deal will have on jobs, wages, and the environment through a series of rallies and other press events in a half-dozen cities. 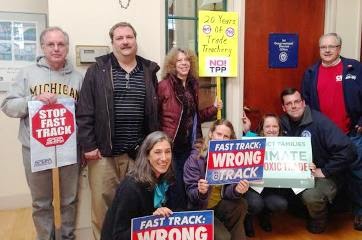 On Tuesday morning, Teamsters from Local 313 in Tacoma joined the Fair Trade or Bust! bus riders outside the Mount Vernon office of Congresswoman Suzan DelBene. They rallied for Washington's food suppliers, good-paying jobs, and a healthy environment. 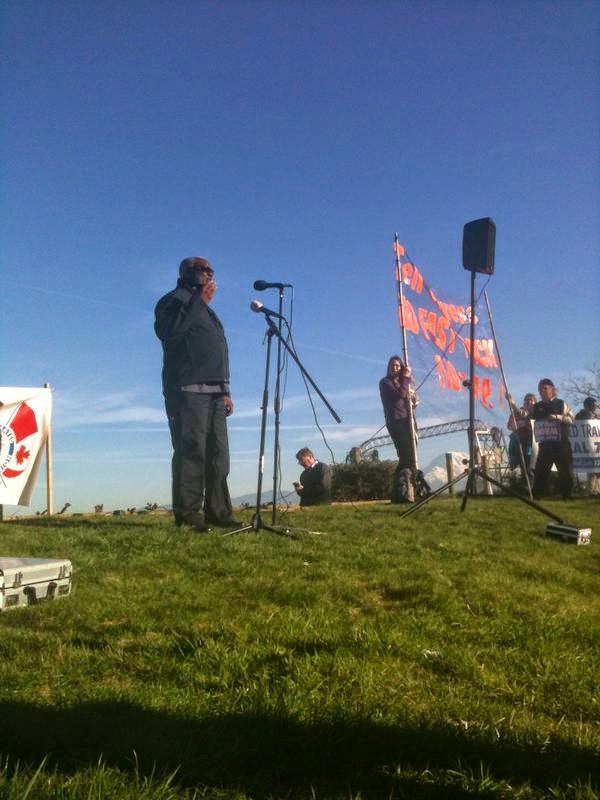 In Tacoma, Wash., 100 people (including Teamsters) came out to a rally in Fireman's Park to tell Congressman Derek Kilmer to vote no on Fast Track. 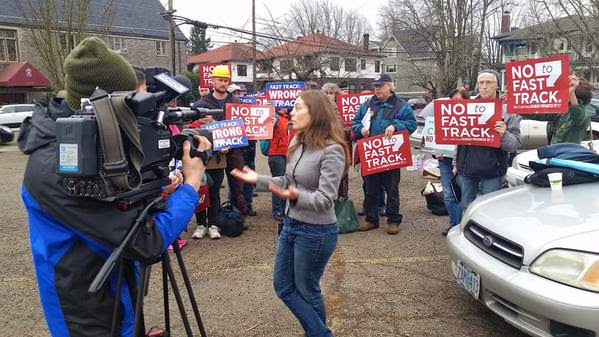 Today the Fair Trade or Bust Bus started out at Rep. Suzanne Bonamci's office to tell her the same thing. At noon the bus rolled into Portland to wave Teamsters' 'Fast Track Wrong Track' signs in front of Congressman Earl Blumenauer's office. They head next to the office of Ron Wyden, who holds a key to the fate of Fast Track in the U.S. Senate.

On the East Coast, Rep. Richard Neal woke this morning to a Berkshire Eagle op-ed telling him to vote no on Fast Track. Later in the day rallies were held outside his Massachusetts offices in Springfield and Pittsfield.

You can help shine a light on the secretive TPP by joining a Twitterstorm on Thursday, Feb. 19 between 1-2 pm Eastern Time. Look for the #FightFastTrack hashtag.
Posted by Teamster Power at 2:38 PM