Right to work on the move in Wisconsin, stalled in West Virginia, Missouri (maybe) 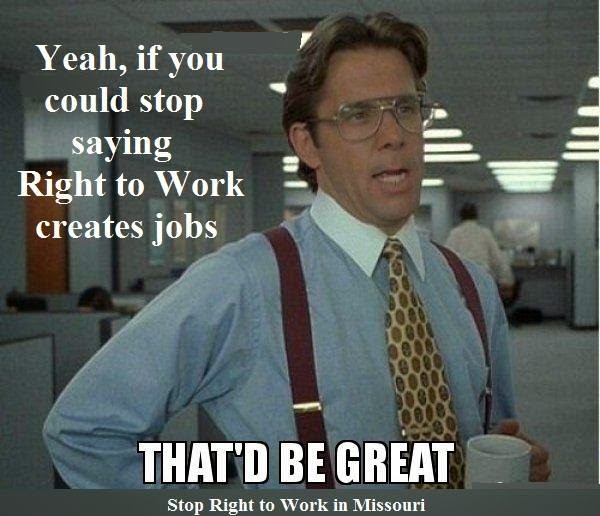 Bad news from Wisconsin: Right to work will advance in the Legislature next week. According to the Associated Press,


The Wisconsin Legislature will take up a right-to-work bill next week in a surprise move that runs contrary to the wishes of likely 2016 presidential candidate Gov. Scott Walker who had urged lawmakers to delay any debate until later in the year.

Republican Senate Majority Leader Scott Fitzgerald announced the plan Friday on WTMJ radio, saying he expects Walker will sign the bill even though he doesn’t have any assurances. Walker was in Washington on Friday for a National Governors Association meeting and his spokeswoman didn’t immediately return a message seeking comment.

Walker rose to prominence in 2011, when he pushed through a law known as Act 10 that effectively ended collective bargaining for most public workers. That led to protests involving as many as 100,000 people at the state Capitol and a 2012 recall election that Walker won.

And -- no shock here -- job-killer Gov. Scott Walker will sign the bill if and when it passes. The Milwaukee Journal Sentinel reports:


Republican leaders are fast-tracking so-called right-to-work legislation and Gov. Scott Walker's spokeswoman said Friday he would sign the measure, despite refusing to say whether he would do so in his re-election campaign last year.

The news is a little better in West Virginia, where Senate President Bill Cole seems to be backing off efforts to pass it. West Virginia MetroNews reports:


It’s possible the issue won’t make it through this legislative session. State Senate President Bill Cole (R-Mercer) said Thursday on MetroNews Talkline he wants the Senate to take up Right To Work, but they’re not going to do it if the House doesn’t have time to address it before the end of the regular session.

“There’s no sense in starting down that road if both houses aren’t ready to take it on,” Cole said.

And in Missouri, Republican state lawmakers are coming out in opposition to right to work. Rep. Nick King, for example, said:


I have knocked on thousands of doors in the 17th district over the last year. Behind hundreds of those doors I have found hard-working family men and women who belong to a union of one sort or another.

Ford is the most obvious group of union workers in our district. But there are also electrical workers, carpenters, pipe-fitters and many others. And so far, without exception, each of these hard-working family men and women have asked me, face-to-face, to oppose Right to Work. Not most of them, all of them. The only constituents who have asked me to support Right to Work are people who are not union members. Go figure. I suppose I will eventually talk to a union member who does not like being in a union or paying union dues, or feels they have been threatened in some way, but so far I have not found one.

The fight against inequality continues.

Posted by Teamster Power at 1:58 PM