Please help Walmart workers disciplined for striking against the company 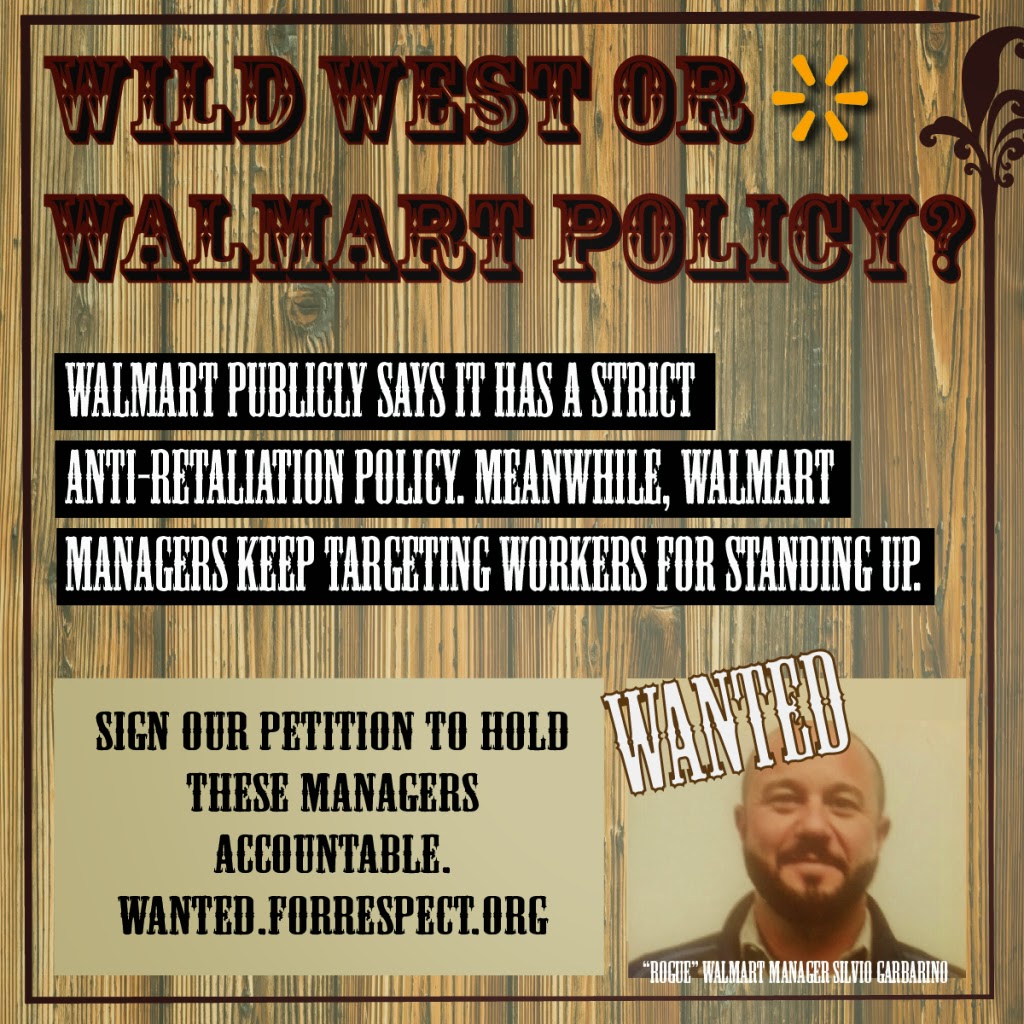 The OUR Walmart campaign held demonstrations across the country last week calling on Walmart managers to reverse disciplinary actions against 35 workers.

The workers in nine different states participated in Black Friday protests against the retail giant.

Walmart managers have been illegally spying on, disciplining and even firing workers who spoke out.

Despite Walmart’s publicly stated anti-retaliation policy, the company lets the managers get away with targeting workers who exercise their rights.

Mother Jones reported on what happened to one of the Walmart workers, 26-year-old Kiana Howard of Sacramento, Calif.


I didn't graduate from high school because I couldn't pass the math part of the exit exam. I did go back in 2013 and get my diploma. I was screaming and crying. I was so happy.

About a week later, I started working at the local Walmart. I love working around people and having conversations while ringing them up. You could be having a bad day and one customer in line says a joke and changes your whole day. My coworkers there were like family. We took care of each other because we were all going through the same situation. The managers, on the other hand, they don't give a damn about us.

I started off at $8.40 an hour. Then California raised the minimum wage, and I got my yearly raise, which put me up to $9.80. But the most hours I could get in any week after picking up extra days and taking extra shifts was 36. After paying rent and utilities, I was barely scraping by. I was on welfare, getting $300. When they cut that off, I really started struggling. And then they cut my food stamps down by more than half, to $136, so I started having to spend money on food. I went to food banks to make sure I fed my seven-year-old son.

I live an hour away. I don't have a car. I have to catch the bus and the light rail every day. My schedule was all over the place. Some days I would have to be at work at 5:30 in the morning, and then some days I would work from 8 p.m. to midnight. I was tired all the time. It was just madness. Especially because there's no buses that run after 10 p.m...
I missed three days because my son was sick, and I was late three days. They hold that against us for a whole year...

Around August of last year, I'd had enough and put in an availability change with my supervisor. I told them I could only work between 5:30 a.m. and 8:00 p.m. That way I could get home to my son. People who had worked there for years told me, "Oh, they are going to cut your hours back for a while, and then you will get them back again." But they cut my hours back—to just 23 a week—and they kept them cut back. It went on for a good month or two. That's one reason I decided to join Our Walmart...

On Black Friday we went on strike. The organizers picked us up in a white van and drove us to a picket at the Rancho Cordova store. It was me and a couple of other Our Walmart people. They had balloons; they tied them on our wrists. They had posters. And we stood out there for a minute, we talked, and we had people get on the mic and speak. We had a DJ out there. It was like a little party. I did an interview on the news...

They retaliated on January 13, which was the day I got fired. I had a four-hour shift. Thirty minutes before I was about to get off, they pulled me off the register and brought me in the office. It was like, "You went on strike for Black Friday…" I wasn't listening because I was upset. She said it counted as my fourth unexcused absence and that rolls over into me being terminated. I signed my papers and I gave her my badge and my vest and I left.

You can help support the workers who were fired and disciplined for fighting back. Sign the worker petition telling Walmart US Labor Relations Manager Vice President Vicky Dawson to uphold Walmart’s policy and immediately discipline or fire these managers that have been involved in trying to illegally silence workers. (Click here to sign the petition.)
Posted by Teamster Power at 3:44 PM