Anti-TPP activists are continuing to rally across the country as members of Congress prepare to return to Washington. They may well arrive for an epic battle over Fast Track legislation.

Fast Track would let Congress rubber stamp the secretly negotiated TPP. Fast Track is also the only way the deal will ever get passed. If Congress had to actually debate the TPP, people would find out what's in it and start reaching for their pitchforks. ,br />
The TPP, or Trans-Pacific Partnership, would send U.S. jobs overseas, lower wages, raise the cost of medicine and imperil food safety and the environment. TPP supporters want to pass Fast Track so Congress can send the secretly negotiated deal to the president before the public wakes up and realizes what happened.

Activists are ramping up pressure on Ron Wyden, the Democratic senator from Oregon who holds the key to Fast Track legislation. He hasn't said whether he supports Fast Track. If he does, he will provide cover for other Democrats to vote for it. 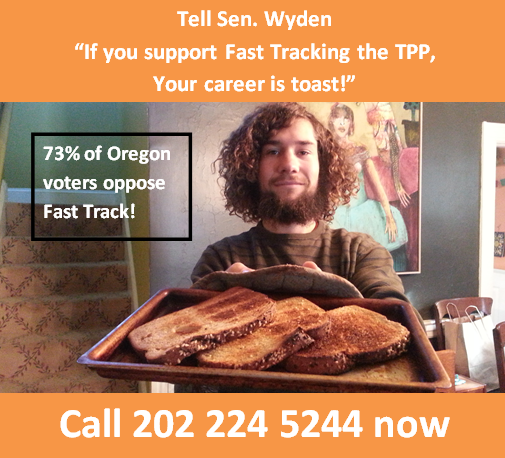