Back in 2011, when Wisconsin job-killer Gov. Scott Walker began his war on workers, American music icon Steve Earle said “Collective bargaining for working people is a fundamental component of democracy, and we can’t afford to let it slip away.”

He had just released the songs ‘Harlan Man‘ and ‘The Mountain‘ on a two-track digital single, with all proceeds benefiting the America Votes Labor Unity Fund via SaveWorkers. The songs depicted life as a card-carrying union member.

So it is fitting that this workingman’s warrior has released his latest collection of songs as all eyes are once again on Wisconsin. There the Senate last night passed a right-to-work bill over the objections of thousands of protesting working men and women.

So it is also fitting that it's a blues album. 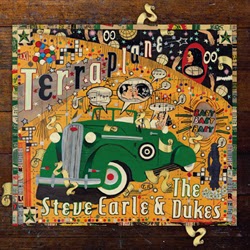 Here's how Rolling Stone described Earle in a review of the album, Terraplane, which Earle recorded with the Dukes:


Nearly 60 years old, he's learned how to make the most of a voice that's been weathered by decades of hard partying and harder touring. He sounds raw, ragged and real, backed by a band whose time on the road hasn't worn away a looseness that seems to suit these new tunes. Over the course of 15 minutes, Earle huffs, puffs, croaks and croons, and the band winds up capturing the final take — the one where all the weird shit happens at the right place — on the fourth try.

Paste calls it 'a work of many textures':


On the randy, low-flying Stones-evoking “Go Go Boots Are Back,” Steve Earle scrapes the same guttural rock ‘n’ roll that made “Copperhead Road” so compelling. But as raw and guitar-stung as “Boots” is, Terraplane is a work of many textures.

Like The Mountain, Earle’s bluegrass project, this collection grounds in a single genre. Focusing on Texas and Chicago blues, Terraplane is a loose-grooved exhumation of Lightin’ Hopkins, Freddie King and Mance Lipscomb, artists Earle grew up on in San Antonio.

From the harmonica bleat on the swaggering “Baby Baby Baby (Baby)” to the jaunty “Ain’t Nobody’s Daddy Now,” Earle plumbs the carnal underpinnings of the blues: feasting on what can be, never mourning what’s done. It is frisky, with musicians thumping and plucking in what feels almost like a jam.

You can buy the album here and here.