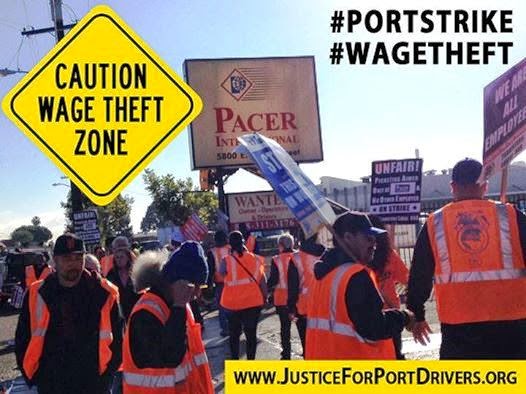 According to Andrew Khouri at the Los Angeles Times,


The companies -- QTS Inc., LACA Express and WinWin Logistics Inc. -- agreed to “respect drivers' right to choice with regard to unionization," according to the joint statement.

Since Monday, some drivers from the firms had set up picket lines at marine terminals as company trucks entered, then took their lines down when the vehicles left the locations, organizers said.

The drivers say they are improperly classified as independent contractors, leaving them with fewer workplace protections and lower pay than if they were company employees.


What these trucking companies are doing is illegal and corrupt. They lease the trucks back to the drivers and then they cannot solicit work from any other company. This is an end run around labor laws. These companies should be fined or put out of business.

By the way, here's another company that misclassifies drivers: FedEx (you guessed it).  CNN Money has a terrific story about a misclassified FedEx Ground driver who sued the company and won:


Reggie Gray thought working for FedEx was his ticket to a better life.

It turned out to be anything but: His years as a driver for FedEx Ground ended with him filing for bankruptcy and taking the company to court.

Gray is one of the thousands of FedEx (FDX) drivers who have sued the company for classifying them as contractors, rather than employees. Many, including Gray, have won.

"We all signed up for what we thought was the American dream," said Gray. "We received the exact opposite. It was a really bad deal."