For a living wage and a union, California bus drivers rally and port drivers strike

Today in California truck drivers at the Port of Los Angeles/Long Beach extended their strike to two more companies as Facebook shuttle drivers rallied in the Bay area. Both groups of drivers want better lives, higher wages and a union.

The strike, which began Thursday, kicked off another season of short sudden strikes. On the same day the port drivers walked off the job in Los Angeles, hundreds of striking federal contract workers marched on Capitol Hill to demand a $15 minimum wage and a union. Back in California, Walmart workers staged their first-ever sit-down strike in a Crenshaw store, refusing to move for two solid hours. The action was livestreamed and can be seen here.

The port truck drivers and Facebook shuttle drivers are leading a wave of worker resistance to the unequal distribution of the nation's growing wealth. They are fighting on many fronts: against wage theft, against misclassification, against disruptive schedules, against dangerous working conditions and against retaliation for trying to form a union.

The port truck driver strike is starting to have an impact, according to Justice for LA/LB Port Drivers spokesperson Barb Maynard. Maynard said two companies that said they wouldn't sit under the same roof with the Teamsters are now sitting down and negotiating ... with the Teamsters.

According to CBS Los Angeles.


Drivers intend to follow trucks from Pacer and HRT to customer locations, including the rail yards, and picket the trucks while they are working at those locations.

Truck drivers at the port have been walking off the job since the summer over their classification as independent contractors. The drivers want better pay and benefits and work place protections.

After the rally, supporters marched a petition with 5,000 signatures to Zuckerberg, who refused to accept it.


Rome Aloise ‏@ibtrome 5h5 hours ago
Proof that Facebook is behind Loops antiunion stance Facebook refused to allow us to deliver over 5000 signatures urging them to be fair. 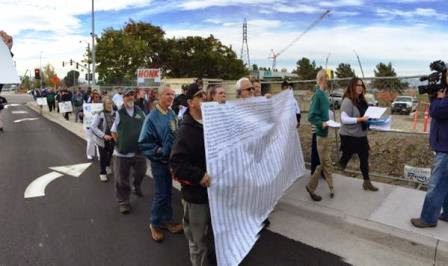 Posted by Teamster Power at 1:05 PM