All along the supply chain, workers demand change in 10 countries and one port 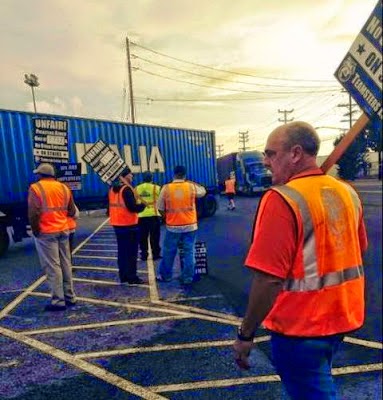 As the Los Angeles port truck drivers who haul Walmart goods continued their strike in the sixth day, Walmart workers who make and sell the goods demanded change in 10 countries.

The Orange County Register reported the port drivers struck six companies by Tuesday. With the support of the Teamsters, they have tenaciously held continuous picket lines from the beginning of the strike. According to the Register, it's having an impact:


The strike is exacerbating congestion at the ports, which is already high due to a lack of truck chassis and rising trade volume from the improving economy.

Dockworkers with the International Longshore and Warehouse Union have been working without a contract since July and have faced recent accusations from the Pacific Maritime Association that the union is intentionally orchestrating the slowdown.

Port truck drivers want to be classified as employees and not independent contractors. As employees, they would be able to form a union and receive workplace protections.

This afternoon, the striking drivers marched on the boss and delivered petitions demanding dignity and respect.

Around the world, Walmart workers took action to demand better wages, better working conditions and an end to retaliation. Twitter tells us: