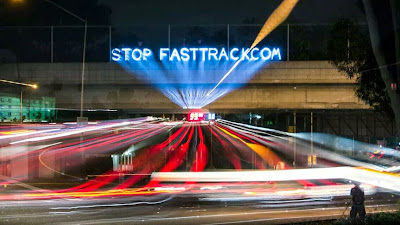 
The Communications Workers, the Teamsters and CTC led the anti-fast-track drive. Other backers include the Steelworkers, the Bakery Confectionery and Tobacco Workers and Grain Millers, the AFL-CIO, the Denver Area Labor Federation, the Machinists, the Service Employees, Public Citizen and Democracy for America.

They followed their initial drive with the “#StopFastTrack Week of Action” to produce more calls, e-mails and rallies. Details are at StopFastTrack.com.

Besides the letters, e-mails and petitions, the anti-fast-track campaign hosted a community forum in Sacramento, demonstrations outside lawmakers' offices in Chicago, Elgin, Ill., Portland, Ore., Boston, Allentown, Pa., San Diego, Seattle and Olympia, Wash., Denver and elsewhere and a phone bank in Chicago.

Teamsters in Allentown, Pa., rallied outside Rep. Charlie Dent's office on Wednesday to urge him to vote against fast track in the lame-duck session. Dennis Hower, president of Teamsters Local 773, led the rally.


NYers sport a rockin #TPP banner at #StopFastTrack action in Albany -> call your Rep at http://StopFastTrack.com


For the third year in a row, government negotiators for 12 Pacific Rim countries have missed an internal deadline to reach agreement on a controversial U.S.-led trade deal.

And though negotiators for the accord, known as the Trans Pacific Partnership (TPP), say the process is nearing completion, critics of the deal are expressing optimism that both public opinion and political timing are increasingly against the deal.

“The reason the Obama administration keeps missing deadline after deadline, year after year, is that it’s pushing an extremely unpopular agenda that benefits a handful of big corporations at the expense of the economy, environment and public health in each TPP country and beyond,” Arthur Stamoulis, executive director of the Citizens Trade Campaign, an advocacy group that opposes the TPP, told IPS.

Posted by Teamster Power at 5:24 PM