Port truck drivers in Los Angeles went on strike today to protest wage theft even as striking federal contract workers marched up Capitol Hill to demand a minimum wage of $15 an hour. It is the fifth port driver strike within the last year and a half.

Teamsters supported both job actions, which signaled the beginning of another strike season by low-wage workers seeking economic justice. Retail workers, especially at Walmart, are eyeing the upcoming Black Friday as a chance to win public support for their demands.

Today the port drivers walked off the job at marine terminals and trucking yards for Total Transportation Services (TTSI) and Pacific 9 Transportation (Pac 9).  Drivers at Green Fleet Systems (GFS) agreed to remain in the “cooling off” status because of ongoing talks with the company owners.


A court recently ordered two port drivers to return to work at Green Fleet Systems as employees after they were fired for challenging their misclassification as independent contractors. But since the last strike in July, 35 drivers were fired for refusing to withdraw their wage and hour claims. Drivers have experienced a dramatic increase in wage theft, leaving some drivers owing the company for driving for them. 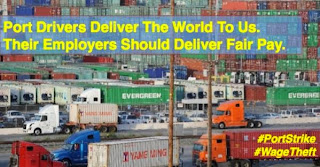 
Some truck drivers who work at the ports of Los Angeles and Long Beach walked off the job Thursday, organizers said, in a protest against two trucking firms they accuse of wage theft.

The job action—the fifth in about a year—comes amid rising tension between a powerful dockworkers union and multinational shipping lines which are negotiating a new contract for some 20,000 workers on the West Coast...

Truckers argue that they are improperly classified as independent contractors, leaving them with fewer workplace protections and lower pay than if they were company employees.

In July, they put down their picket lines after L.A. Mayor Eric Garcetti requested a "cooling-off" period.  Protest organizers say the struck companies promised to allow all drivers back to work without retaliation.

But Thursday morning, organizers said drivers from two harbor-area firms, Total Transportation Services Inc. and Pacific 9 Transportation, went back on strike, alleging that the companies have since retaliated against them.