Continuous picket lines held in Los Angeles by striking port drivers and Teamsters got a shot of energy today from 50 Walmart workers, even as Walmart workers in Ohio struck stores in Dayton and Cincinnati.

The solidarity among Walmart workers and port drivers shows the movement is growing to raise wages and empower workers. The fall 2014 strike season may bring the most sustained, intense strike activity by low-wage workers to date.

A year ago, an Ohio Walmart held a canned food drive for its own workers. Today, workers held their own food drive and went on strike to protest the firing or disciplining of their coworkers. Walmart has retaliated against workers who spoke out about hours so short and wages so low they can't feed their families. A report issued today supports their claims.

Port drivers endure similar injustice. Two port drivers were fired in retaliation for protesting their misclassification as independent contractors. (The good news: They were ordered by a court to return to work as employees.) The port drivers' employers don't pay them for hours waiting in line at the port and deduct fuel, maintenance and fees from their paychecks. Like Walmart workers, port truck drivers are left with little money to survive at the end of the month.

One port driver actually had to decide one night whether to get a tire for his truck or take his sick son to the hospital.

One Walmart worker says she takes a sandwich to work and that about it for the day. She drinks a lot of tea to feel full, eggs are a luxury and once in a blue moon she'll go to Save-A-Lot and buy meat. 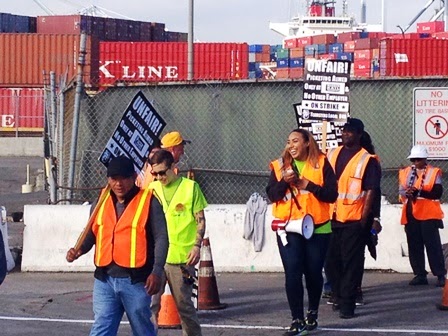 
Drivers and their supporters appeared before the Long Beach Board of Harbor Commissioners to ask them to do whatever they can to help them fight against area trucking companies that misclassify them as independent contractors instead of employees....

“We are fighting for better working conditions,” said trucker Fidel Gonzalez, adding that the truckers will continue to fight “for as long as it takes.”


The drivers are demanding a more fair wage that incorporates time spent waiting for dispatch to issue a load, waiting in line at the ports and sitting in traffic on nearby roads. They also want to eliminate what they characterize as illegal barriers to unionization, obstacles to workplace protections and effects from being classified as independent contractors.

Members of the Teamsters and other unions in the Los Angeles/Long Beach area have supported the strikes at the terminals and intermodal yards.

Posted by Teamster Power at 2:19 PM